Home > Publications > Burkina Faso looking ahead: prospects for change or much of the same? 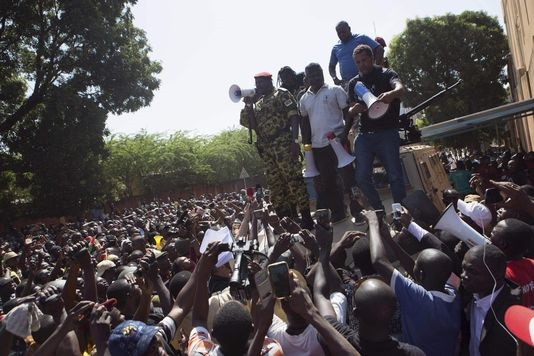 Burkina Faso’s November elections were historic in many ways, but whether they pave the way for a genuine political change remains an open question.

On 29 November 2015 Burkina Faso went to the polls, for what many have hailed as historic presidential and legislative elections. Roch Marc Christian Kaboré, the candidate for the Mouvement du peuple pour le progrès (MPP) party, won the presidential elections with 53,49% of the votes, thereby obviating the need for a second round.  The elections are indeed historic in a number of ways. They bring to a close a year marked by both upheaval and hope as a popular revolution brought the regime of long-standing ruler Blaise Compaoré to a fall in October 2014. But the year-long transition experienced some serious wobbles. These were provoked by tensions between the transitional authorities and the former presidential guard of Compaoré, resulting in a failed coup attempt in September 2015. The transitional government’s decision to bar from the elections individuals who had supported Compaoré’s attempt to modify the Constitution in 2014 to allow him to run for another term, further contributed to heightening political tensions. The elections, however, mark the successful closure of the transition period despite these troubles. It is particularly noteworthy that the elections were peaceful, relatively free and fair (according to preliminary assessments), and that its results have not been contested by the losers (in particular, by Kaboré’s main challenger Zéphirin Diabré of the Union pour le progrès et le changement (UPC) party). The degree of citizen engagement to monitor the elections also merits admiration, and sends out a strong signal on the capacity for citizen empowerment. These developments seem to bode well for Burkina Faso’s democratic future.

At the same time though, the election results raise some interesting questions about the scope for profound political change in the country. The new president, Kaboré, is a former ally of Compaoré who operated at the highest levels in the Compaoré system for 26 years until internal power struggles led him, and a number of other senior officials from the then ruling Congrès pour la démocratie et le progress (CDP), to walk out and create his own party in 2014. Many MPP cadres similarly hail from the former ruling party. Thus, while the Compaoré regime has been officially dismantled, a very high level of elite recycling will take place – a development to which the elections have given a de facto imprimatur of legitimacy. It thus remains an open question whether a systemic rather than a mere cosmetic change is going to take place.

Of course, Kaboré may choose to practice a form of politics different from that of Compaoré – a point he has repeatedly stressed in interviews in the run up to the elections. How he tackles a number of ‘hot dossiers’ that he has inherited from the transition government will be telling in this regard. This includes the judicial investigations into the assassinations of late President Thomas Sankara and journalist Norbert Zongo, which implicate the closest circles around Compaoré. Even more delicate though for the MPP are possible investigations into corrupt practices under Compaoré, as these could directly affect some MPP officials due to their past links with the CDP. To show that he is genuinely oriented towards change, Kaboré will also need to address pressing and politically sensitive issues such as security sector reform and mining sector reform (over the past decade the mining sector has simultaneously become a source of economic growth and major social unrest).

But the results of the legislative elections may end up being more important than the presidential elections in shifting the political landscape. Although the MPP won a majority of seats, it failed to win an absolute majority. The new president will therefore have to form a coalition which could possibly limit the ability of the MPP to ‘rule the old way’, especially if it chooses to form a coalition with smaller opposition parties rather than with the CDP (this option appears politically unfeasible) or the UCP (this option seems politically unlikely due to the intense rivalry and ideological differences between Kaboré and Diabré, though it is not impossible). However, this counter-balancing effect could be limited by the weak political weight that smaller opposition parties bring to the table and the risk that over the long term, they will simply be absorbed by the MPP. Much will also depend on which party, or coalition of parties, will emerge as the main opposition force in a National Assembly that is now more fragmented but also more diverse than it has been in the past thirty years.

The election results are also important because they seem to hint at a structural weakness of ‘traditional’ opposition parties. The parties that have performed best at the presidential and legislative elections are those most strongly linked to the old regime: the MPP, the UCP (Diabré is a former official of the Compaoré regime, though he went into dissidence well before Kaboré, in 2010), and the CDP (it obtained 18 seats and will therefore be the third largest party in the National Assembly). Parties that have a longer history of opposition activities in Burkina Faso, such as the Union pour la Renaissance/Parti Sankariste and the Parti de Renaissance Nationale, were seemingly not able to reap the benefits of the popular revolt at the polls. Although their candidates came in third and fourth in the presidential elections, the parties did not significantly improve their percentage scores in the presidential and legislative elections compared to the 2005/2007 and 2010/2012 polls. This suggests a certain frilosity for change within the Burkinabe electorate, especially in rural areas, and the ability of the MPP, UCP, and CDP to tap into political and patronage networks inherited from the Compaoré era. It also shows that an uneven political playing field persists, possibly placing structural obstacles to the emergence of a genuine and strong political opposition. While it is early days and many options remain open in Burkina Faso’s future, for now it remains to be seen whether the groundswell for change that emerged in October 2014 will effectively translate into a genuine political change.

Dr. Valerie Arnould is Senior Research Fellow with the Africa Programme at the Egmont – Royal Institute for International Relations in Brussels. She is also a Postdoctoral Research Fellow at the School of Business and Law at the University of East London in the UK.