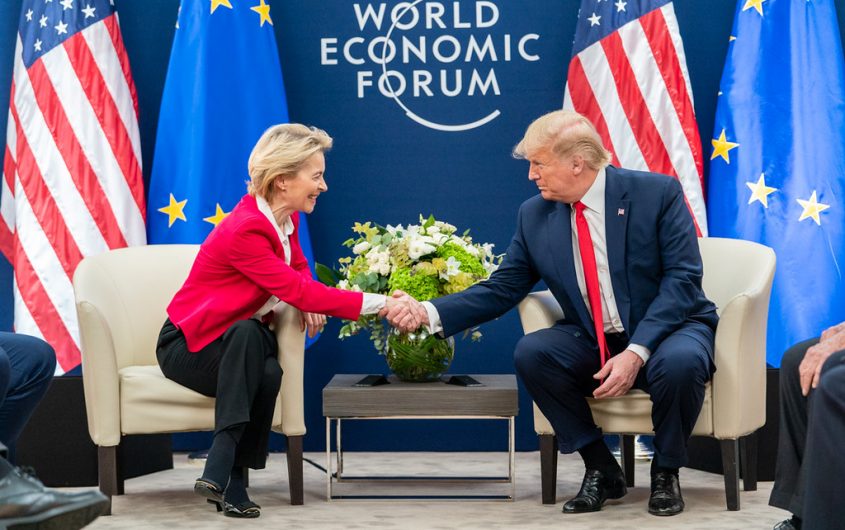 This commentary  has been published by Clingendael.

Transatlantic trade is stuck. Surprisingly, the US-China technological competition offers the possibility for a reset of the transatlantic relationship. As emerging and sensitive technologies are becoming a critical aspect of foreign policy and national security, US-EU cooperation on technical standards could provide an opportunity for both to move beyond their recent trade quarrels.[1]

Transatlantic trade is in dire straits. This year is set to once again unearth old and new trade quarrels, from the Airbus-Boeing litigation saga, the still looming tariff threat on European cars, to the French digital service tax and the future of the WTO.

To manoeuvre the trade agenda toward a more positive, progressive trajectory, US president Donald Trump and then-European Commission president Jean-Claude Juncker agreed in 2018 to a ceasefire and simultaneous negotiation agenda for industrial tariffs and regulatory cooperation. But this agenda plateaued for a number of reasons, including the ever-recurring question of agriculture, among other issues.

Perhaps most importantly, though, the 2018 negotiation mandates could not really convince anyone on the American side that they would address the Trump administration’s principal concern: the perceived fundamental imbalance of the trade relationship (mainly argued on the basis of the $160 billion trade in goods deficit).

Enter 2020 and the World Economic Forum, where Trump and new Commission president Ursula von der Leyen, following mutual calls to “reset” the transatlantic relationship by both American and European leaders, vowed to reach a deal before November. That the trade imbalance will be a key metric for the Trump administration was underlined by recent US trade deals with Korea, Japan, and China.

The European Commission has time and again, for better or worse, objected to “managed trade” outcomes whereby Europe would commit to pre-determined export restraints or to specific purchase orders. However, some form of managed trade (e.g. purchase commitments) will likely be a necessary step should a trade deal stand before the final phase of the US election campaign.

That being said, broad commitment to more US energy and agriculture purchases was a trick already pulled by Juncker in 2018. In 2020, a similar arrangement could once again be enough to announce a limited ‘phase-1 deal’ of sorts.

For a chance of a “reset”, the trade agenda needs to take a step back and consider the bigger picture

But while such an arrangement might be politically appealing to the Trump administration in campaign season and economically appealing to a tariff-anxious European car industry, it can by no means be the talked-about “reset”. For a chance of a “reset”, the trade agenda needs to take a step back and consider the bigger picture.

With US-China technological competition as a defining characteristic of this decade, a transatlantic technology cooperation agenda that addresses the rules, norms, and standards governing the use of emerging and sensitive technologies is becoming a critical aspect of foreign policy and national security. Trade, for its part, will be among the distinctive tools to shape this agenda and can support a “reset” in transatlantic relations: via standards cooperation.

Troubles of Transatlantic standards cooperation
Regulatory cooperation, including cooperation on technical standards, is truly not the poster child of transatlantic trade. One reason for this, and maybe most importantly in today’s context, is that it is unlikely to reduce the US trade balance deficit in any meaningful way.

In addition, despite being praised as bringing large economic gains to advanced economies, the history of regulatory cooperation in EU-US affairs is long and notorious. Decades of attempts to converge regulations and standard-setting practices, including during the TTIP negotiations, have seen only limited success due to diverging policy objectives, institutional set-ups, regulatory cultures, a lack of trust, and strategic competition.

Fundamental differences in how standards are developed in the EU and US make meaningful cooperation an utterly complicated affair. But while regulators on both sides of the Atlantic have dug themselves in over issues such as the infamous chlorinated chicken or dairy products, a new geopolitical urgency for a more strategic approach to standards cooperation has arisen: China.

The geopolitics of technical standards
Not all technical standards are of strategic importance, nor is close cooperation achievable in all sectors. It is the emerging and sensitive technologies with potential non-civilian application (e.g., 5G, AI, Quantum Computing, Internet of Things (IoT), autonomous vehicles) that tick both boxes: strategic relevance and few pre-existing international standards.

Their strategic value is further demonstrated by China’s concerted effort, with a mix of trade, industrial, and financial tools, to become a leading global technological superpower in various emerging technology sectors.

On standards, Beijing has embarked on a multi-faceted effort to push for widespread international adoption of its preferred technical standards – through both leadership positions in international standards organisations (e.g., International Organization for Standardization (ISO), International Electrotechnical Commission (IEC), 3rd Generation Partnership Project (3GPP), and the promotion of Chinese technology, along with its standards, via foreign policy tools (e.g., BRI and 5G).

The security implications of certain emerging technologies can be profound, as the 5G/Huawei saga demonstrates

These efforts are not only a commercial challenge for European and American business. The security implications of certain emerging technologies can be profound, as the 5G/Huawei saga demonstrates.

China’s governmental support for the adoption of its national champions’ 5G standards in international standards organisations (3GPP being the most important one for 5G) and simultaneous sales support of Huawei products in third countries, opens room for exploitable security vulnerabilities as part of a specific standard design.

In combination with new national security legislation that requires companies in China to hand over information at the behest of the government, certain standard-setting activities could directly affect national security, data privacy, or civil liberties.

Without having to uproot existing standard-making institutions and cultures, the EU and US could coordinate their efforts in international standards bodies such as ISO, IEC, or 3GPP. Closer cooperation between domestic standard-setting bodies (e.g., CEN-ANSI) by way of agreements/treaties could equally support alignment.

Dialogues and agreements exist, but are plagued by systemic competition, rather than guided by strategic rationale. The Trilateral Meeting (US/EU/Japan) could further offer a platform through which bilateral standards cooperation for emerging technologies could be internationalised.

By leveraging the size and depth of the transatlantic market, the partners can shape the physical and digital technologies and ensure they are developed along the security interests and values of our free and open societies. Differences in regulatory approach and objective will of course remain, but today’s geopolitical urgency could unlock a new chapter of standards cooperation and usher in a “reset” for transatlantic affairs.

Making the strategic case
It is this strategic dimension to the regulatory cooperation agenda that requires more serious attention from both sides. The US Congress already advocated for close coordination with Europe to counter China’s state-driven standard-setting strategy.[2]

The European Commission, for its part, has highlighted the strategic dimension to standard cooperation on various occasions. This mutual intent was also translated into the agenda of the Executive Working Group (EWG), the negotiation and cooperation platform established following the Trump-Juncker meeting in July 2018.

Despite the geopolitical urgency, the standards cooperation agenda remains largely sector driven and dictated by commercial interests and public policy concerns ranging from health, to the environment, to consumer protection.

Both Washington and Brussels have legitimate concerns and interests in this respect and must of course retain these factors when considering regulatory alignment with any country. But Brussels is not seldomly described as a “regulatory leviathan” in US policy and business circles, stymieing American business (e.g. competition fines on Google and Amazon; French digital service tax).

Committing to closer cooperation would serve the geopolitical reality that both Washington and Brussels face: an ever-tightening technology-security nexus

These specific differences should not distract from the strategic value of standards cooperation in emerging technologies such as AI, where committing to steps of closer cooperation would serve the geopolitical reality that both sides face: an ever-tightening technology-security nexus.

Toward a Transatlantic “reset”
For the transatlantic trade agenda, a reset requires nothing short of a paradigm and framing shift: away from rigid “trade is for trade” mantras and toward a more integrated view on trade, technology, and security. With traditional trade issues all but stuck, 2020 offers an excellent opportunity on both sides to push for this integration. Standards cooperation lies squarely in the middle.

Both the United States and Europe have considerable market power, allowing them to shape this newly evolving governance field along common interests and values. It is up to leaders in the US and Europe to reassert these commonalities and strategically direct their economic and innovation power towards it. When the dust settles, standards cooperation finally could become one of the cornerstones for a “reset” of the transatlantic relationship.