RFID: New killer application in the ICT world, New big brother, or both? 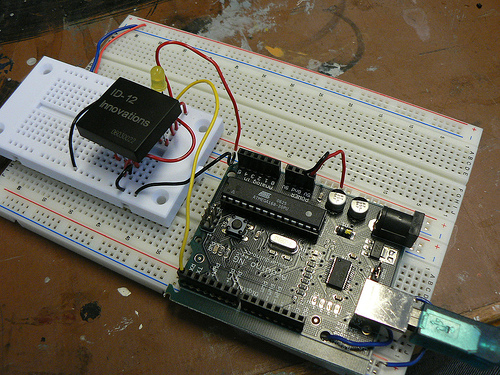 RFID (“Radio-Frequency Identification”) is a new telecommunications service that has received a lot of attention in the last years, due to its growing use1. Though it is based on a rather old technology (the Radar), a progressive rise in quality and decrease in price seem to have opened a lot of new opportunities. It has been estimated that this market could reach the world value of 30 billion euro in 2015. In 2007, its value was already estimated at 5 billion dollars. Worldwide sales of RFID tags reached approximately 2.16 billion in 2008, a substantial increase from the year before. In 2015, some estimate that 400 billion could be sold. According to the European Commission, in 2007, tags sold were used in smart cards and payment key fobs (36%), smart tickets/bank notes/ secure documents (14%), cases or crates of consumer retail goods (13%), retail apparel (5%), animals (5%), and books (4%). Much hype has surrounded RFID during the last years. One describes ill patients who would be automatically treated in the hospitals or at home through body sensors, immigrants who could be tracked anytime anywhere on the map, refrigerators which would select outdated food or compose propositions of menus according to their content, prisoners under permanent radio control through chips borne or injected under their skin, cars which will pay fees and find their way in the traffic alone, food whose origin will be permanently controllable. Sometimes, however, the deployment of RFID has not brought the anticipated benefits. It has also brought protests in some parts of the public. The rise of RFID systems provokes a lot of interrogations. They encompass among others health protection, privacy, standards’ compatibility, and the development of a new Internet system. RFID thus leads to a broader reflection about the Internet of the future. Furthermore, RFID appears at the vanguard of a much broader and deeper change of the Internet, though not fully clear until now, which is described as “the Internet of things” (IoT). In such a context, many colliding interests must be taken into consideration. In 2006, the European Commission thus launched a consultation process on this topic, which produced various reactions. In 2007, it presented a communication. The present report aims at describing the main stakes of this technology in Europe3. It will describe the nature of RFID (§ 1), the numerous new uses of the technology (§ 2), the main problems it generates (§ 3) and the present regulatory framework in the European Union applying to RFID (§ 4).
(Photo credit: hc gilje, Flickr)