Home > Publications > According to the International Energy Agency’s climate projections, the EU 2030 Energy Strategy will be insufficient

According to the International Energy Agency’s climate projections, the EU 2030 Energy Strategy will be insufficient 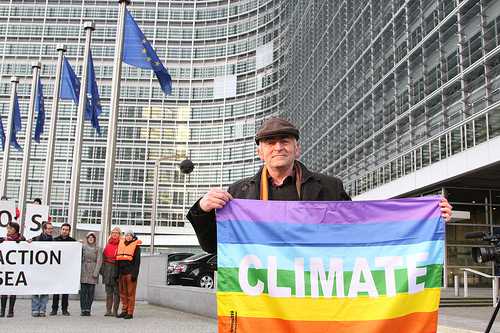 As COP 21 fast approaches, it has seemed interesting to have a quick look at the projections contained in the recent IEA report on energy and climate change in order to see what they mean for the climate negotiations to come.

According to the International Energy Agency’s climate projections, the EU 2030 Energy Strategy will be insufficient

The International Energy Agency (IEA) recently produced an important report for the climate negotiations due to be concluded at COP 21 in Paris in December 2015. Of course, these projections concern all climate measures, and not only those directly related to energy policy. The COP negotiations in Paris cover many domains, including financial transfers, technology transfers and measures fighting deforestation among others. However, everybody knows that the decarbonisation of the energy system of the planet, and thus of the EU, remains the central topic. Without it, there is no hope of solving the climate problem.

So what are the implications of the IEA’s projections? At a global level, during recent decades, greenhouse gas (GHG) emissions, of which carbon dioxide (CO2) makes up the majority, have increased. This growth is presently slowing, but this is not happening quickly enough. Meanwhile, the warming of climate is happening faster than expected. Thus, the hope of keeping the temperature rise under two degrees celsius above pre-industrialized levels in the medium-term is dwindling. In a nutshell, more needs to be done. By everyone.

This means that the existing commitments of participants in the present climate negotiations are too low (INDC Scenario – the participants of most concern are the United States, the EU and Russia).[1] Their implementation would reduce energy-related CO2 emissions to 35 gigatons by 2030, but a reduction to 26 gigatons would be required to remain in the framework of the two degree temperature rise (450 Scenario). The world thus needs to find additional energy-related CO2 reductions corresponding to a fall of nine gigatons more than the current INDC scenario (a third less than the projected acceptable emissions!). It also needs to reduce its energy demand by 10% more than the INDC Scenario.

These nine gigatons must of course primarily be found in the States, which have not taken commitments yet. However, it is doubtful that big and developed emitters like the United States and the EU will not have to make an additional effort. The modalities of such an effort remain undefined. There is an economic logic to financing the best costs/benefits measures, and many of these are to be undertaken in underdeveloped countries. So the search for the nine gigatons could partly take the form of additional financial transfers towards these countries. However, for the world as for the EU, decarbonisation means the progressive elimination of the use of fossil fuels, beginning with coal, and then oil, and then gas. The energy system remains central to any climate strategy.

Here, the IEA’s projections present great interest for the EU. At the global level, the IEA estimates – rather surprisingly at first glance – that though the difference in energy-related CO2 emissions between the INDC and the 450 Scenarios is huge (35 and 26 gigatons respectively), the difference in investments would be limited ($35.8 trillion dollars and $37.9 trillion respectively).

An additional problem arises in the way the IEA foresees an additional reduction of CO2 emissions. For example, many of these reductions are meant to come from carbon capture and sequestration (CCS). Any recent report on this topic shows that their results fall far, far short of original expectations.

In any case, the IEA thus presupposes that the EU will need to increase its efforts beyond its existing commitments in the 2030 strategy. For example, the ceiling of emissions (3.4 gigatons in 2013) should be reduced by 2030 to 2.0 gigatons of energy-related CO2 emissions (450 Scenario) instead of 2.4 gigatons (INDC Scenario). This represents an additional – and not negligible – reduction of 16%. It is interesting to notice that nobody has studied the impact of such an additional constraint on the present EU strategy for 2030. The additional weight on investment finance is quite substantial. The required clean energy investments would go from $222 billion to $286 billion. This represents a rise of 30%. The weight of additional investments is thus much more important at the EU level than at world level. Here, too, nobody has studied the impact on the present EU strategy.

What form can this additional effort take? Although the topic is complex, the general answer is simple. Either the EU must reduce its energy consumption (thanks to less growth or less energy intensity) or increase the percentage of renewables in its energy mix. In both cases, this will require more investments.

Before entering this new path, the EU Member States should first ensure the implementation of their present commitment to cut emissions by 40% by 2030. There are already problems with this target. Clearly, when Member States are presented with execution plans, they are not eager to make precise commitments about energy efficiency. They are no more eager to define a precise target for renewables. The 2030 strategy is obviously based on a more decentralised and nonbinding approach than the 2020 one. If one remembers that the greatest contributor to the reduction of GHG emissions since 2008 has been the economic crisis, and that the ETS has regularly malfunctioned, the general situation is not very encouraging.

But, on top of this, it is important to remember that the 2030 strategy, even if fully implemented, will not suffice to reach the 450 Scenario. When the world gathers in Paris in December, there will thus be a hidden agenda for the entire EU energy strategy.

[1] China is not included in this calculation although it is the world’s largest GHG emitter. At the time of the IEA’s report, China had not yet submitted its pledge, known as INDC. It is now available. An analysis of the Chinese INDC by the National Centre for Climate Change Strategy and International Cooperation seems to reveal, however, that the IEA’s analysis still remains valid. Even with the addition of the Chinese INDC, we are still short of the two-degrees celsius target and more ambition is needed. All countries are expected to submit their INDCs by 1 October 2015.