Home > Publications > Arab reform: what role for the EU?

Arab reform: what role for the EU? 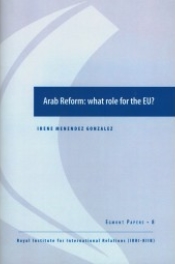 The issue of Arab reform has been brought to the fore of discussion in the aftermath of the September 11 attacks, and further intensified by the transatlantic debates which followed the Iraq war. In stark contrast with the ‘benign neglect’ and active support towards authoritarian governments of preceding decades, Arab reform in the West is now seen as a vital security interest and the main antidote to Islamist terrorism. Heightened concern with the democratic deficiencies of the region has given rise to a plethora of initiatives on both sides of the Atlantic. The US Greater Middle East Initiative, the “Partnership for Progress and a Common Future” launched by the Group of Eight (G8) in June 2004, EUUS summits, together with European programmes towards the Mediterranean and wider Middle East all attest to a commitment to reform. Such developments have also sparked off debate on how best to implement the enhanced focus on reform. Recent initiatives have reflected transatlantic consensus on the sequencing of reform, where – despite differences in approach – emphasis is laid on the strengthening of civil society as a motor of reform and, more generally, on a gradual bottom-up approach. However, the apparent convergence in policy circles on the merits of gradual change has been increasingly challenged by experts of democratization processes on both sides of the Atlantic. The role of civil society as a motor of reform is increasingly contested, while cooperation with governments of the region has proved of limited relevance, especially in the post 9/11 context. Attention has thus focused on the need to target political institutions and other actors in the political arena as a complement to existing approaches.1 In light of these developments, it is important to assess whether Western (particularly European Union) policies have a significant role to play in Arab reform. To what extent do existing and intended policies provide a window of opportunity to enhance reform? What to make of transatlantic cooperation? Does this call for a fundamental revision of EU strategies, or should EU approaches merely be improved? Although the focus shall be on European Union action, reference shall be made to initiatives external to the EU in so far as they affect and raise questions about EU policy (initiatives such as GMEI and NATO).
1. D. Brumberg, ‘Liberalization versus Democracy: understanding Arab political reform’, Working Paper 37, Carnegie Endowment for International Peace, 2003; A. Hawthorne, ‘Middle Eastern Democracy: Is Civil Society the Answer?’, Carnegie Papers No. 44, March 2004; R. Youngs, ‘Europe’s uncertain pursuit of Middle East reform’, Carnegie Papers No. 45, June 2004. This paper outlines the rationale behind European democracy promotion policies in the Arab region. It reviews European policies implemented in the area since the 1990s, and, after assessing them, concludes by suggesting ways in which to enhance European strategies of reform. It will argue that while the comprehensive approach underlying EU policies, from the Euro-Mediterranean Partnership and the European Security Strategy to Wider Europe, provides an appropriate framework to tackle the problems of the region, EU policies need revision to be successful. In particular, EU policy should address the Islamist dimension of Arab civil societies and enhance the use of conditionality. That said, since genuine reform must ultimately come from within Arab societies, there are limits to what any external policy of reform can achieve. Nevertheless, external actors can and must certainly help in the process.
(Photo credit: Egmont Paper 8)