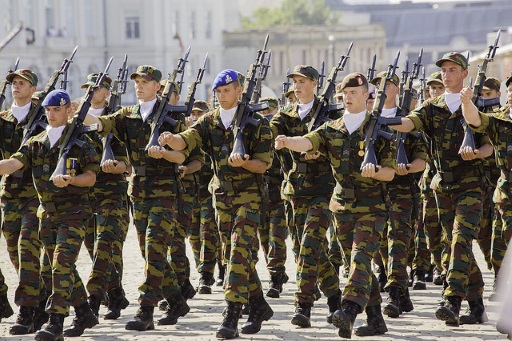 In this article Sven Biscop argues that it is futile to put troops on the streets of European capitals when the real battle against ISIS needs to be fought at source.

This commentary appeared in European Geostrategy on 26 January 2015.

Pairs of Belgian soldiers have been standing guard at the entrance of NATO headquarters and other sensitive locations in Brussels since the Belgian security services successfully raided a terrorist cell in the Belgian city of Verviers on 15 January, just days after the attack on the offices of Charlie Hebdo in Paris. One rather hopes that NATO especially was already somewhat protected before; two foot soldiers will hardly make much difference in any case.

Indeed, why deploy the army in the streets of Brussels at all? What one seems to forget is that no terrorist attack took place. Unlike in May of last year, when a returned French ‘foreign fighter’ murdered four people in the Jewish Museum in Brussels, this time an attack was prevented, thanks to excellent police and intelligence work – and yet now the army was deployed whereas last year it was not. That does not mean that there is no more remaining threat, quite the contrary, but it does more than nuance the causal link between troops in the street and security at home. Khaki in the streets is mostly bad theatre, a feeble attempt to signal resolve in the face of a threat that can never be entirely prevented (although in this particular instance it actually was).

It is, moreover, the wrong theatre. Self-styled jihadist terrorism in Europe is related, quite obviously, to those who believe they are fighting a holy war in the Middle East, notably, but not only, the self-proclaimed Islamic State (IS). That is the theatre on which Europe’s efforts should focus with renewed vigour.

Of course domestic measures are indispensable, in Belgium as elsewhere in Europe: continued vigilance by police and intelligence services to avert terrorist attacks; engagement with groups at risk of indoctrination to prevent more young Europeans from becoming ‘foreign fighters’; reintegration into society of those who return from the conflict zone; and, ultimately, a serious look at our society to understand how our own citizens can become so alienated from it. But if European governments are pretending to their citizens that these domestic measures alone will bring security, they are deceiving them. Jihadist terrorism cannot be separated from the international geopolitical and ideological context that inspires it. And yet one hears remarkably little about the Middle East, even though our air forces (including Belgian F16s) are campaigning there.

The question is: do our actions in the Middle East so far improve the situation and thus enhance our security? Or is it the opposite? The answer, unfortunately, is not self-evident.

The primary responsibility for fighting the IS lies with the states of the region, for the security of these regimes is directly at stake, even though many of them initially channelled support to the IS. They are certainly not the only ones to have created their own greatest enemy (someone should write a book on Frankenstein and International Relations), but that does not absolve them from their responsibility. Meanwhile we in Europe, while wringing our hands about the war in Syria, tried very much not to look at Iraq – that was an American problem, not ours – hence our surprise when the IS made Syria and Iraq into a single theatre of war. To which Libya is in the process of being added, the lacklustre political and economic follow-up to our 2011 military intervention presenting the IS with another weak and divided country ripe for the taking.

And now we are in the midst of another air campaign. The rapidity of the IS advance forced the US and Europe to cobble together a coalition of the not so able and rather unwilling from the region, united only because they fear the IS even more than each other, and to launch air strikes to prevent Iraq from falling into IS hands altogether. What have we achieved? The territorial expansion of the IS seems to be contained, at least in Iraq, but the area under their control can only be retaken by ground forces. In Syria, the losing party is not so much the IS as the other opposition groups, who are being fought by both the IS and the Assad regime. The latter is in no position to regain any lost territories, but it certainly is not being defeated either. In Libya the IS incursion further complicates an already intractable situation; who will fight to stop them is not clear, nor whether a renewed air campaign is in the cards.

At most, the air campaign has produced an uneasy stalemate. That is not synonymous with failure: without the western intervention, the IS would most likely have grabbed even more territory before, if ever, the hesitant regimes in the region would have been stirred into action. But time is not wholly in our favour.

We need time to train and equip the armed forces of Iraq, and to forge a consensus about a political project that the Iraqi soldiers that are to do the fighting can believe in. Absent that, no matter how lavishly equipped, they will never be a reliable force. More time is needed to negotiate with Iran, which ultimately needs to be a part of the political solution that the region requires. But in the meantime time does not necessarily work in favour of the not very cohesive coalition, loosely bound together only by opposition to the IS, if no concrete initiatives are taken to reinforce it. Meanwhile the IS is under pressure, as the increasing rate and brutality of the publicised executions show (another instance of literally atrociously bad theatre), but time allows them to consolidate their hold on the territories that they have captured and to continue to lure young Europeans to their cause. Similarly, the more time goes by the more Assad strengthens his remaining hold on power. And as time elapses, Libya is just sinking deeper and deeper into the quagmire.

The air campaign, clearly, is a holding operation. But holding for what? If the air campaign too is but theatre, deceiving ourselves into believing that we are addressing the problem, it will in the end be counter-productive. If it buys time for the diplomatic offensive that is indispensable for a wider settlement for the region, then its effect will be positive. That part has yet to be scripted, however.