Home > Publications > The EU–Japan Summit considered in light of the renewed US–Japan defence guidelines: new momentum for the strategic partnership? 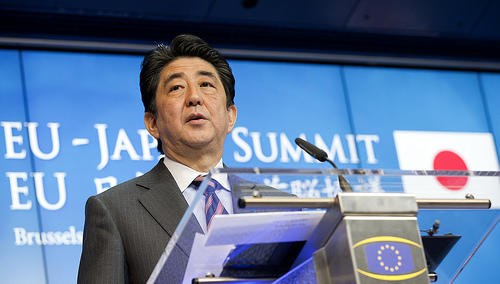 During Prime Minister Abe’s state visit to Washington, Japan and the United States made international headlines after revealing renewed joint defence guidelines that no longer confine defence cooperation to Japanese territory. After this potential turning point for Japan’s international security profile, the European Union will eagerly await how Tokyo’s new image will be reflected in its ambition to strengthen its security ties in the Asia-Pacific. In this light, the upcoming EU-Japan summit may constitute a great opportunity for providing impetus to ongoing negotiations on strengthening EU-Japanese security cooperation as part of a comprehensive strategic partnership agreement.

When Japanese and EU leaders meet in Tokyo this Friday, their annual summit could mark the beginning of a pivotal year for their long-standing strategic partnership. With parallel negotiations over a Free Trade Agreement and a Strategic Partnership Agreement entering the final straight, the coming months will be crucial for laying the foundations of closer economic and political ties between Tokyo and Brussels. Additionally, the recently renewed US–Japan defence guidelines might have raised EU hopes of strengthening its security cooperation with Tokyo, ideally in the framework of the EU’s crisis management missions.

Under the renewed security and defence guidelines, unveiled on 27 March, US–Japanese defence cooperation is no longer confined to Japanese territory and may be applied to a wider regional and global context. In the words of John Kerry, the guidelines ‘establish Japan’s capacity to defend not just its own territory, but also the United States and other partners as needed.’ Consequently, the agreement might not only tighten cooperation between Japan and the United States, but also substantiate Japan’s ambition to strengthen its security cooperation with other partners, including those in Europe and the Asia-Pacific.

Importantly, the renewed US–Japan defence guidelines give impetus to the recently emergent reorientations in foreign and security policy narratives in both Japan and the United States. They strengthen Tokyo’s path to a ‘normalization’ of its role as an international actor and provide Abe’s discourse of ‘proactive pacifism’ with a concrete framework of action. In turn, the guidelines represent a breath of fresh air for the Obama administration’s narrative of a ‘rebalance to Asia’. Moreover, in demonstrating Washington’s commitment to reinforcing regional alliances through reassurance and encouragement, the guidelines may well serve to strengthen America’s profile as a ‘leader from behind’ in the Asia-Pacific.

In this regard, while Washington’s rhetoric of reassurance seems intended to underpin the strength and continuity of its regional alliances, its politics of encouragement appear to be aimed at strengthening its partners’ security capacities and enhancing intra-regional cooperation among allies in the Asia-Pacific. Certainly, these practices cannot be understood outside the Asia-Pacific’s current security context, particularly in view of recent concerns raised in Washington and Tokyo over China’s building work on disputed South China Sea reefs. In this light, US politics of reassurance and encouragement need to be partly understood as an implicit response to China’s rising strategic clout in the Asia-Pacific region.

That European countries do not necessarily share the extent of Tokyo’s or Washington’s concerns over China’s rise in the region is possibly best illustrated by the recent decision of 14 European countries to become founding members of China’s newly established Asian Infrastructure Investment Bank (AIIB). Importantly, this decision paved the way for a number of US regional partners in the Asia-Pacific to join the bank – with Japan remaining the only major regional country outside this new institution. In this regard, the EU’s failure to develop a common position on the AIIB as well as its traditional reluctance to develop a stronger security profile in the region might have somewhat weakened its attractiveness as a reliable security partner for Japan. On the other hand, given the EU’s security profile and focus on non-traditional security challenges, such as in the area of maritime security and crisis management, a strengthening of EU–Japanese security cooperation might provide the Abe administration with a further opportunity to promote Japan’s new image as a proactive security provider.

The EU, for its part, seems more interested than ever in strengthening its security ties with partners in the Asia-Pacific, though its ambitions seem to strongly deviate from those of the United States and appear to mainly focus on developing and legitimizing its own profile as an international security actor. In 2014, the EU signed a Framework Participation Agreement with South Korea, which laid down the legal foundations for a stronger South Korean engagement in EU missions. However, the signing of a similar agreement with Japan has so far been highly problematic in view of Japan’s constitutional provisions. In this light, the renewed US–Japanese defence guidelines might provide impetus for debating alternative ways of strengthening EU–Japanese security ties during the upcoming summit. If it uses its momentum, the forthcoming EU–Japan summit might thus constitute a great opportunity to provide crucial stimulus to on-going negotiation that deepens and intensifies the EU–Japan strategic partnership.