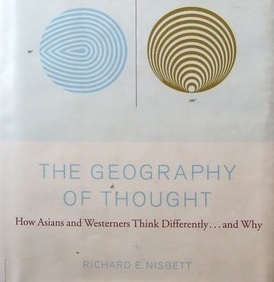 A few years ago I stumbled on a little book in the Georgetown University bookshop written by former Yale University Professor Richard Nisbett, published by the Free Press in 2003 and entitled ‘The Geography of Thought’. I highly recommend it as summer lecture for all those interested in understanding the mind of the other. Understanding the mind of the other is key to diplomatic practice, in particular in a negotiation setting where a Western mind meets an Asian mind (and vice versa). The effective negotiator is the one who succeeds in entering into the mind of the other and in reconstructing the adversary’s thought as if it were his own. But there are barriers to overcome in this enterprise. Not just cultural barriers resulting from differences in values and perspectives (think of the so-called ‘Asian values’-debate), but more importantly barriers resulting from deep-seated differences in each other’s cognitive equipment. The specific merit of this valuable study consists in uncovering the underlying thought processes of your Asian or Western negotiating partner thus helping you to address the unnerving question ‘Why in the hell is he saying what he says?’