Home > Publications > The Treaty of Lisbon: a second look at the institutional innovations

The Treaty of Lisbon: a second look at the institutional innovations 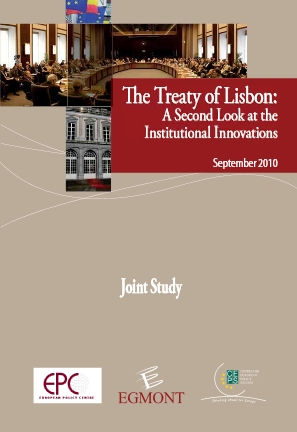 Three years ago, three Brussels based think tanks thought it useful to join efforts in analysing potential implications of the Lisbon Treaty in the field of institutions. At the time that Treaty had not been ratified and the question of whether it would ever come into force was an open one. The result of their efforts was published in November 2007 as a joint study under the title The Treaty of Lisbon: Implementing the Institutional Innovations[1]. It attracted the attention of policy makers, national and European administrations and the academic community.
Now that the Treaty has come into force and that the institutional innovations are gradually being implemented, the same three think tanks have thought it useful to revisit and develop their joint analysis. It is obviously too early to pass final judgment on the implications of the Lisbon Treaty on the institutional framework of the Union. Past experience shows that it takes a period of five to ten years to be able to exercise that sort of judgment. But some trends are already apparent. One aspect common to all European treaties is that, as a general rule, they are not implemented in the exact context, and with the precise objectives, in which they were conceived. This is due in part to the length of the ratification process, particularly significant in the case of the Lisbon Treaty. It is also due to changing circumstances. Two major challenges, which were not so obvious when the Treaty texts were initially drafted, determine the context in which they are being implemented. Climate and energy is accepted as the major issue of the new century and the European Union strives to influence global solutions, not always successfully as was shown by the Copenhagen conference. The banking and financial crisis, initiated in the United States, has economic and monetary consequences which are gradually unfolding, and they influence the balance of economic power in the world. Both challenges are a source of considerable external pressure as the European Union, like other world actors, tries to adapt to the co-management of globalisation.
It is with those considerations in mind, that ten issues have been identified and are dealt with in the following chapters. As in any collective effort, the three institutions involved share the general conclusions to which they have come, but do not necessarily feel bound by the specific formulations in each chapter.