Home > Publications > The Treaty of Lisbon: implementing the institutional innovations

The Treaty of Lisbon: implementing the institutional innovations 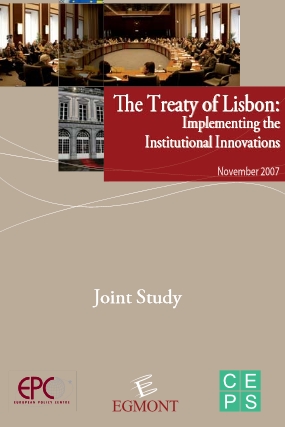 Over the last two years much intellectual energy has been devoted to the analysis of, and the potential solutions to, the constitutional impasse resulting from the failure to ratify the treaty signed in Rome on 18 June 2004. The European Council held in Brussels in June 2007 gave a conclusion to that effort by drafting a mandate which was to be “the exclusive basis and framework” for the work of a forthcoming Intergovernmental Conference drafting a “Reform treaty”. That conclusion was rightly considered to be a great success for the German presidency. The fact is that, over that two year period, much less attention has been given to the practical implementation of new institutional proposals included in the proposed treaty. Even a cursory examination indicates that the implementation of some of these proposals is likely to be uneasy, and in some cases could be a source of future problems or difficulties. This is why three Brussels based think-tanks have thought it useful to join efforts in analysing potential implications of the most significant proposals in the field of institutions. Seven issues have been identified, shared out and debated in working groups, and this publication contains the results of that collective effort. Our aim is to highlight, and if possible, clarify potential problems. We have worked on the basis of the Reform Treaty approved at Lisbon in October 2007, without wishing to cross the lines of the presidency or to pre-empt the conclusions of the ongoing process. As in any collective effort, the three institutions involved share the general conclusions to which they come, but do not necessarily feel bound by specific formulations in each of the chapters. They hope that this collective effort will find some resonance among political leaders and public opinion.