Home > Publications > A European security concept for the 21st century, a Belgian contribution to a comprehensive EU security strategy

A European security concept for the 21st century, a Belgian contribution to a comprehensive EU security strategy 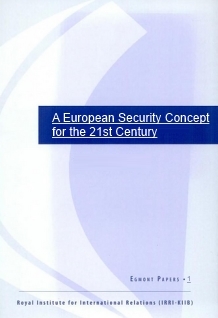 1. The first responsibility of any government is to protect its citizens from harm and to provide them with an environment that induces confidence in the future. Europe as an ever closer Union shares this responsibility with its Member States. 2. In the last two decades, we have witnessed dramatic changes in our environment. Europe is now integrated more deeply than ever before. The end of the Cold War and the bi-polar order are firmly behind us. The pace of globalisation has increased. Our world once again, but in a way different than before, became multi-polar. These changes have radically altered Europe’s security. Based on their unique security approach of partially pooled sovereignty and institutionalised cooperation, the Member States of the European Union are now at ease with one another. They no longer face any military threat amongst them. On the wider European continent, a system of intrusive reciprocal openness has been put in place and has replaced the balance of power. At the global level, interdependence has proven to be not just economic. It is also a political, a cultural and a security phenomenon, as was dramatically highlighted on 11 September 2001. Today, nobody can insulate its security from the rest of the world, since the ramifications of globalisation are borne in upon all. 3. Radically changed times call for radical adaptation of the way we view and handle security. Thirty-five years ago, Pierre Harmel succeeded in updating NATO’s security policy from mere military defence into a longterm endeavour to foster an overall European settlement, based on political, economic and military rapprochement. Today’s security policy needs a similar exercise. 4. The United States government has done its part of the job. In its National Security Strategy it has radically adapted its security policy to what it considers to be the main characteristics of today’s world. Based upon their unparalleled military strength and political weight, the United States has embarked upon a policy that includes pre-emptive actions so as to forestall threats emanating from rogue states, weapons of mass destruction and terrorist groups before they materialise. The European Union and its Member States too are now in the process of similarly and collec- tively defining their long-term security interests and policies. IRRI-KIIB’s European Security Concept for the 21st Century constitutes a Belgian contribution to this endeavour.
5. A European security concept is an essential policy tool that, starting from our interests and values, outlines the long-term overall objectives that we want to achieve and the basic categories of instruments that we will apply to that end. It is a strategy that serves as a reference framework for dayto- day policy-making in a rapidly evolving complex international environment. Implementing the security concept requires a regularly updated action plan. The security concept guides the definition of the civil and military capabilities that the European Union needs to develop.
(Photo credit: cover Egmont Paper)