An audit of European strategy 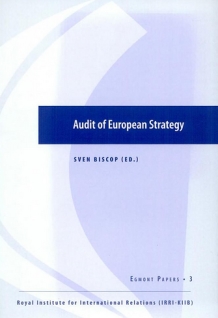 On 12 December 2003, the European Council approved Javier Solana’s European Security Strategy. Few EU documents represent such a clear – and clearlyworded – advance in thinking. Since its adoption, the Commission, the Council and the Member States have all made progress on security cooperation. In June 2004, the European Council has taken further decisions in the field of security. It is not always clear though whether this represents the conscious implementation of the Strategy or an unstructured process of piece-meal change. In the short-term, recent developments have certainly been positive – but if they are not tied to long-term strategic goals, they may prove unsustainable. Thus there is room for an intellectual review of the direction we have taken. The Foreign Policy Centre (London), British Council Brussels, New Defence Agenda (Brussels) and the Royal Institute for International Relations (Brussels) joined together to organize a seminar on the implementation of the Strategy. On 30 June 2004 the Audit of European Strategy brought together key policy-makers from within the European institutions and original thinkers on strategic issues. A first, analysts’ panel debated concrete recommendations to anchor the Strategy’s innovative comprehensive approach to security into policy practice. A second, practitioners’ panel reviewed ongoing and future elaboration of the Strategy in the fields of CFSP, ESDP and Community matters. In this Egmont Paper contributions by the day’s speakers are published. The four organisers have been, and still are, actively involved in the debate on the Strategy. The Foreign Policy Centre and British Council Brussels are jointly responsible for the Global Europe programme, devised to promote new thinking on the EU’s evolution as an international actor. The programme has been supported by the European Commission Representation in the UK as part of The Future of Europe project. New Defence Agenda offers a well-known Brussels platform for thought-provoking analysis and debate. At the request of the Belgian Ministry of Foreign Affairs, the Royal Institute for International Relations has produced a Belgian contribution to the elaboration of the Strategy – which has been published in this series as Egmont Paper No. 1 – and has recently
published The European Security Strategy: Implementing a Distinctive Approach to Security. Prof. Dr. Sven BISCOP, Senior Research Fellow, Royal Institute for International Relations Richard GOWAN, Research Fellow, The Foreign Policy Centre Kate ARTHURS, British Council Brussels Linda KARVINEN, Project Manager, New Defence Agenda.