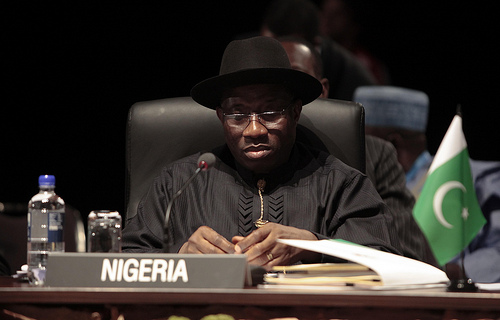 This commentary argues that Nigeria’s inability to tackle Boko Haram has prompted neighbouring countries to look for external assistance and challenge Nigeria’s claim to leadership in West Africa.

The recent Boko Haram attack against the Nigerian border town of Baga and its cross-border raid into the village of Mabass in Cameroun has seen a further regionalisation of the conflict affecting northeastern Nigeria. Chad despatched a large military contingent to Cameroon on 17 January while Lake Chad Basin countries convened in Niamey on 20 January to discuss options for a regional response. These developments raise questions about Nigeria’s regional leadership and the implications for security arrangements in West Africa.

Nigeria is widely regarded as a regional hegemon, particularly in the security field. It led the Economic Community of West African States’ (Ecowas) interventions in the Liberian and Sierra Leonean conflicts, contributed to peacekeeping efforts in Ivory Coast (2002-2004) and has mediated in political crises in Togo, Benin, Guinea and Guinea-Bissau. Nigeria’s pretensions to regional, and indeed, continental leadership explain its 2014 GDP revision to leapfrog South Africa as Africa largest economy. Such potency, combined with the largest population in Africa (one in five Africans is a Nigerian), and a historic role as founding member of the Organisation of African Unity (OAU) and ECOWAS, make the case for Nigeria’s seat at the UN Security Council.

The escalating Boko Haram crisis, however, is seriously undermining this claim. Nigeria has not only failed to contain Boko Haram, but is also hampering a regional response. The May 2014 agreement between Nigeria, Chad, Cameroon and Benin for establishing a Multinational Joint Task Force quickly unraveled because of mistrust between Nigeria and Cameroon and concerns about the Nigerian army’s lackluster performance.

It remains unclear whether Nigerian restraint is a deliberate choice of the result of incapacity. Perhaps the armed forces and government have refrained from mounting a more forceful response because of the rumoured collusion by members of the northern elite, army corruption and political competition in the run-up to the February presidential elections. Alternatively, Nigeria’s armed forces are too dysfunctional for staging a complex operation against a determined opponent. Boko Haram’s territorial expansion points to serious deficiencies in the Nigerian military. Ground forces are poorly motivated and unwilling to engage Boko Haram in combat. The absence of a clear and coherent political and military strategy is compounded by difficulties in military procurement. Consequently, even if a new government were to commit to a robust response this would be unlikely to deliver results in the short term.

Neighbouring countries are therefore taking the lead in developing a regional (and international) response to Boko Haram. Niger has just announced that countries of the Lake Chad region will request UN Security Council authorisation for deploying a multinational force. But such a force is likely to meet resistance from Nigeria. Happy to accept direct military support, Nigeria is highly sensitive to any suggestions of an external involvement, even refusing support in the aftermath of the Chibok kidnapping in April 2014. In November 2014, Nigeria ended defense cooperation with the US after the latter refused to provide it with military hardware over concerns about the Nigerian military’s protection of civilians when conducting military operations.

As Nigeria is unlikely to countenance foreign troops in its territory, a proposed multinational task force could only be deployed in neighbouring countries, and therefore only serve to contain rather than defeat Boko Haram. While this may be a necessary starting point, there is a risk that such a situation would also intensify tensions between Nigeria and Cameroon with possibly detrimental consequences for regional cooperation in the near future.

After years of trying to downplay the conflict, Nigeria’s governing elite is waking up to the corrosive effects on its governance structures. Both the chairman of the electoral commission and the governor of Adamawa state have called for the suspension of elections in the troubled northeast. Unaddressed and allowed to fester, the crises has accentuated existing rifts between northern and southern elites and fuelled sectarian divisions that risk further destabilising the country.

While Nigeria has shown remarkable resilience in the past, the current regionalisation of the Boko Haram crisis and Nigeria’s inability to take appropriate measures should encourage a more sustained political engagement on the EU’s part. It should not only support Nigeria and the region in addressing its security threat, but also to develop a comprehensive response to the insurgency by tackling drivers of the crises, such as marginalisation of the northeast, corruption and sectarian divisions. The EU should furthermore play a more active role in mitigating growing regional tensions and developing an effective regional strategy to address Boko Haram.

Dr. Axel Klein is Team Leader of the Cocaine Route Monitoring and Support Programme at the Royal United Services Institute

Dr. Valérie Arnould is Senior Research Fellow with the Africa Programme at the Egmont Institute.

Jean-Christophe Hoste is Senior Research Fellow with the Africa Programme at the Egmont Institute.

The commentary also appeared on the website of the Royal United Services Institute (RUSI) on 26 January 2015.