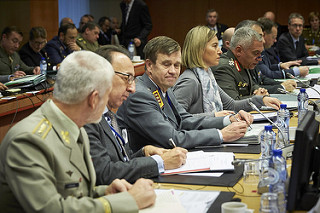 Following up on his intervention at the successful conference on The European Defence of Europe?, which Egmont organized with the support of Raytheon on 6-7 February, Heinz Krieb outlines the steps Europe needs to take in order to be able to project power.

Following up on his intervention at the successful conference on The European Defence of Europe?, which Egmont organized with the support of Raytheon on 6-7 February, Heinz Krieb outlines the steps Europe needs to take in order to be able to project power.

Why should Europe project power? It’s all about countering risks / meeting challenges derived from the main priorities of the EU Global Strategy on Foreign and Security Policy. These are: to build resilience in the neighbourhood, to prevent conflicts in the neighbourhood and beyond (the neighbours of the neighbours, or in view economic and/or moral interests?), and to protect the Union and its citizens.

The risks and threats we are facing are: terrorism (including the risks and threats to key infrastructure), illegal migration (and the need to manage the flow of refugees), no access to the global commons (hence no free movement nor free trade, and lack of supply of critical raw materials).

Consequently Europe should be able to provide capabilities to counter these risks and threats. This needs to be reflected by efforts aiming at, among others: (1) strengthening the military instrument, both qualitatively and quantitatively; (2) strengthening the EU’s strategic capabilities (land, naval, and air); (3) strengthening civ–mil cooperation within the EU (the inclusion of the Commission is paramount); (4) establishing a structure able to manage the Comprehensive Approach, which means 24/7 situational awareness, a political analysis capacity, a planning capacity, and an executive capacity.

Development and provision of capabilities must be seen as a European approach, rather than as a NATO or EU approach: one European single set of forces, provided by EU Member States and non-EU European nations. Political will, i.e. leadership, is needed to proceed. The question is not whether Europe can project power, but whether Europe has got the political will to do it.

The Global Strategy clearly addresses the EU’s will to advance the prosperity of its people. That demands an open and fair international economic system, including sustainable access to the global commons. This results in the ambition to stand united in building a stronger Union that can play its collective role in the world.

Sustainable access to the global commons is key. This includes access to the critical raw materials needed for the benefit of our high–tech industry, the freedom of movement, and, consequently, the freedom of trade. That in turn requires a functioning global order with a commonly agreed security architecture in place, taking for granted the special role of some “selected” nations, coalitions, alliances and/or unions for granted and tolerating global power projection by those.

Back to the original question. For the time being, considering the availability of required capabilities, Europe may be able to project power on a limited scale. See, for example, the 140 EU Delegations worldwide, Operation ATALANTA,  Operation SOPHIA, Operation ALTHEA, 3 EU Training Missions, 11 civilian missions, sanctions against Russia, economic pressure worldwide if required, etc.

However, the EU should strengthen its efforts, as a new political situation may require Europe to take on a role as a real global player, beyond its current strategic and economic power. This should be seen separately from the discussions related to the Common Security and Defence Policy, the nexus between internal and external security, and the current challenges Europe is confronted with.

Brigadier-General Heinz Krieb is Director for Concepts and Capabilities in the EU Military Staff. He writes here in a personal capacity.