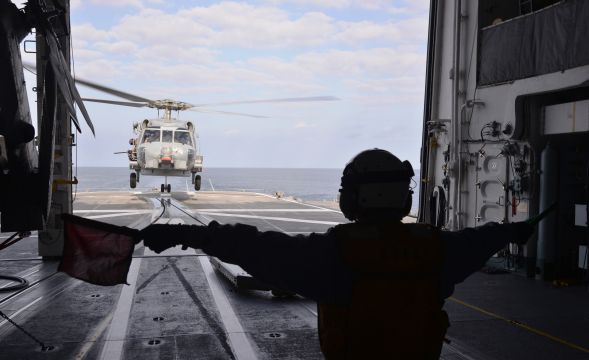 Following up on his intervention at the successful conference on The European Defence of Europe?, which Egmont organized with the support of Raytheon on 6-7 February, Luis Simón calls on Europe not to confuse a “neighbourhood first” with a “neighbourhood only” strategy.

Following up on his intervention at the successful conference on The European Defence of Europe?, which Egmont organized with the support of Raytheon on 6-7 February, Luis Simón calls on Europe not to confuse a “neighbourhood first” with a “neighbourhood only” strategy.

Can Europe project power? Or, rather, should it? In trying to address these questions, I shall treat “Europe” and “power” broadly and superficially. This is to say I shall not get into the discussion about whether European countries should act through NATO, the EU or some sort of coalition of the willing, nor get into a distinction on the economic, military or diplomatic “ways and means” of power. Instead, I shall attempt to justify why Europeans should follow an extrovert approach to foreign and security policy (i.e. one framed around the projection of power on a global scale), rather than an introvert or defensive one, confined to the protection of their immediate geographical neighbourhood.

Europe’s geopolitical picture is broadly defined by the threat of rising instability in the east and south, as well as by America’s intention to shift its geostrategic centre of gravity towards Asia, i.e. away from Europe and its immediate geographical neighbourhood. In this context, the prevailing sentiment amongst many European officials and foreign policy experts is that Europeans should make a greater contribution to tasks related to defense and deterrence in Eastern Europe and border management and security sector reform in (some parts of) Africa and the Middle East.

The arguments that we hear to justify this emphasis on the immediate neighbourhood are that resources are limited, that Europeans should be realistic about their capabilities and constraints. To be sure, there are important exceptions in Europe, like Britain or France, who think much more broadly about strategy and about geography, and about how the two relate to each other. But those are exceptions, and they are partial exceptions.

Notwithstanding those (partial) exceptions, when Europeans think about projecting power, assuming that they do at all, they tend to think that the immediate neighbourhood comes first and that the rest of the world is not so much Europe’s business. Or rather, that it is a place where Europeans can do business, but not security or power. Broadly speaking, these are the sort of geopolitical parameters that define most discussions on power and strategy in Europe, whether in an NATO, EU or national context.

Entering a discussion on geopolitical priorities is positive, because when it comes to strategy and to exercising power, prioritizing is of essence. In this sense, the immediate neighbourhood should probably “come first”.

A least three important reasons underscore the interconnectivity of Europe and its immediate neighbourhood with the wider world.

The first reason has to do with the geography of the European peninsula, and its contiguity with the rest of the great Eurasian landmass – and with some of the regions that make up Eurasia.

The second relates to technology, and the technological changes that underpin financial and economic globalization as well as military innovation. These changes are altering our conception of time, space and distance, and leading to greater global economic and geostrategic interconnectivity.

The third reason has to do with the rise of the Asia-Pacific region more specifically. The emerging strategic competition between China and the US is likely to become the organizing factor of international power relations in the years to come, and probably in the decades to come. Europeans need to come to terms with this notion, which they haven’t yet. The Asia-Pacific is emerging as the “primary theatre” of global geopolitics. This means that whatever happens in other, secondary theaters (including Europe and its immediate neighbourhood) will in many ways be shaped by side-effects and great power tradeoffs originating from developments in the primary theater. In other words, an actor’s ability to affect geopolitical outcomes in and around the primary theater will largely determine its influence elsewhere.

What does mounting global geopolitical interconnectivity mean for European power?

To begin with, Europeans should probably think much more seriously about the so-called “middle spaces”, namely the Indian Ocean region, Central Asia and the Arctic.[1] These middle spaces connect Europe and its immediate neighbourhood with the rest of the great Eurasian landmass, all the way to the primary theater of international power politics: the Asia-Pacific. They are called “middle spaces” because, geopolitically speaking, they are in between the Asia-Pacific and the immediate European neighbourhood. They are the natural geopolitical meeting points between the “European world” and the Asia-Pacific – the middle spaces are where Europe meets the rise of Asia. To the extent that they constitute Europe’s pathway to the primary theater of international politics, these “middle spaces” are Europe’s ticket to power in the 21st century. The Indian Ocean stands out.

Asian powers like China and India, but also Japan or South Korea, are reaching westwards, all the way to the Middle East, Africa and even Europe, in order to satisfy their need for energy, other minerals and export markets. And they are doing that through these middle spaces, mainly the Indian Ocean and Central Asia, but perhaps also increasingly the Arctic in the future. While the extra-regional outreach of Asian powers may be primarily economic and diplomatic, it will increasingly have important implications upon regional power balances in Central Asia, the Persian Gulf and much of Africa. It is therefore not very clear how is it exactly that Europeans are supposed to secure their interests in their immediate neighbourhood while ignoring other regions, whose economic, political and strategic developments feed into the European neighbourhood and Europe itself.

Prof. Dr Luis Simón is research professor at the Institute for European Studies at the Vrije Universiteit Brussel (VUB) and director of the Brussels office of the Elcano Royal Institute. He is also an Associate Fellow at the Royal United Services Institute (RUSI) and the Baltic Defence College.