Home > Publications > For a ‘more active’ EU in the Middle East. Transatlantic relations and the strategic implications of Europe’s engagement with Iran, Lebanon and Israel-Palestine

For a ‘more active’ EU in the Middle East. Transatlantic relations and the strategic implications of Europe’s engagement with Iran, Lebanon and Israel-Palestine 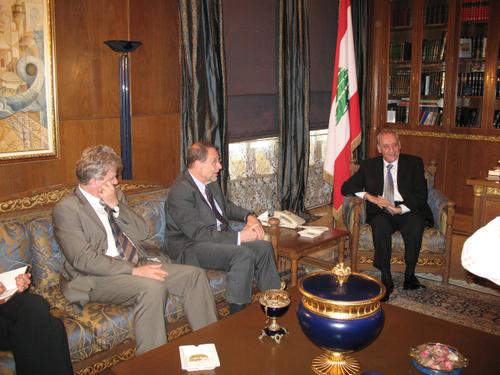 The 2003 European Security Strategy (ESS), calls for the EU to be ‘more active’ in pursuing its strategic objectives. The two probably most salient examples of a ‘more active’ EU are to be found in the Middle East.2 The ‘EU3’ (France, Germany and the UK) are leading nuclear negotiations with Iran. The EU has taken the lead in reinforcing the UN peacekeeping operation in Lebanon, UNIFIL, as authorized by UNSC Resolution 1701 of 11 August 2006. Over 70% of the enlarged force or 7,600 troops out of 10,800 are provided by the EU27. This engagement clearly fits in with the EU’s interests as defined in the ESS, notably the need ‘to promote a ring of well governed countries […] on the borders of the Mediterranean with whom we can enjoy close and cooperative relations’, and to avoid ‘a WMD arms race, especially in the Middle East’. The cases of Iran and Lebanon can be seen as positive examples of an EU that is more united and hence ‘more active’. Yet, they also provoke fundamental strategic questions on the ambitions and potential of EU policy towards the region, and of the EU as a global strategic actor. These are questions which the EU inevitably will be confronted with if it continues its ‘more active’ role in the Middle East. 1. Prof. Dr Sven Biscop is a senior research fellow at Egmont – the Royal Institute for International Relations in Brussels and professor of European security at Ghent University. This paper was commissioned by the Israeli-European Policy Network (IEPN), an initiative of the Friedrich Ebert Foundation. The author thanks all colleagues who participated in the IEPN meetings where the first draft of this paper was presented, as well as Prof. Dr. Rik Coolsaet, Prof. Dr. Michael Brenner and Dr. Sharon Pardo, who kindly reviewed the paper before publication, for their vital comments and suggestions. A number of quotes in the paper refer to interventions by officials at various seminars held under the Chatham House Rule which the author attended, hence their source cannot be revealed. 2. Including Iran obviously stretches the traditional definition of the Middle East, although I will argue that developments on Iran and, for that matter, Afghanistan, are inextricably linked to Lebanon, Israel-Palestine and Iraq. As the ‘greater’, ‘broader’ and ‘wider’ Middle East have all gained some connotation or other, I will opt for ‘the Middle East broadly defined’.
(Photo credit: Council of the EU)