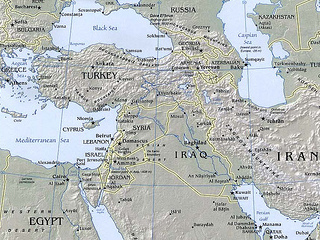 The crises in Europe’s neighbourhood seem to get worse by the day. The recent decision by Russia to intervene in Syria, supposedly to fight against DAESH has raised new questions about the cohesion of the international response to the war going on in the Levant and the Middle East.While this new turn of events could open the door to hard headed diplomacy as the meetings in Vienna past and future seem to indicate, there are serious questions about the coherence of the strategy between international players and between them and the regional actors.

If we are in there for the long haul, how can and should we plan for a succesful exit and what are the stakes and the role of Europe?

The principles of prudent planning require that one always plans for the worse, in order to be prepared for all options. One issue in this respect is timelines. The crises in Europe’s neighbourhood, especially in the Southern and Eastern Mediterranean, are systemic and likely to last for a long time, probably a generation. That will require strategic patience and resistance to quick fixes, combining short-term conflict management with long term comprehensive and ambitious strategic objectives. Only a regionally-owned solution will ensure long term sustainability. Third parties outside the region could help first by stopping misbehaving and then by offering security and economic guarantees to whatever regional order is agreed among the local players.

The situation is very dangerous and the risk of a global conflagration should not be underestimated. It could spread beyond the Middle East to the Caucasus, Central Asia and even the Balkans. Like in other historical circumstances, for instance the run-up to WWI, there is a risk of ‘sleepwalking’ into it. There is no shortage of warnings by historians and strategists of a ‘pre-WWIII’ situation: arms race (happily fuelled by the P5+1), block to block confrontation, instrumentalisation of minorities and a culture of risk taking. But History is mainly useful for learning not to repeat past mistakes, less so for predicting the future, even if as the saying goes, those who forget the lessons of History are bound to repeat them.

All this requires statecraft and statesmanship, both sorely absent for the time being.

ISIL is a symptom of a wider problem affecting the countries and societies of the region: state failure, bad governance and lack of human development. Several reports by the UNDP on Arab Human Development have fully documented the situation. They were not written by international bureaucrats but by people from the region who have a deep knowledge of the dynamics and constraints of the societies they hail from.

Non-state actors are not unique to the region or to this moment in time. They are active in Africa and in Asia. They have precedents in history, going back centuries. IS has nevertheless developed a sophisticated occupation of land and of narratives that make it a tough adversary. It cannot be confined to the label of terrorist organisation. It is much more than that.

Sectarianism is a policy tool used by all players in the region. Sunni clerics (Wahabbi’s and Muslim Brothers in particular) have repeatedly condemned ‘Alawite criminals’ and ‘Orthodox crusaders’ as well as ‘Western heretics’. Shiite Iran has used its own rhetoric to galvanise support against the other camp. Orthodox popes have blessed the Russian intervention as a ‘holy war’ and Israeli rabbis have given religious legitimacy to the killing of Palestinians. This deleterious propaganda could actually come back to haunt their sponsors. Neither Iran nor Saudi Arabia for instance are immune to the domestic consequences of their religious extremist incitement.

Western meddling in the region has a long history and not a happy one. It has, from WWI onwards, sown the seeds of the current situation, in particular, the break-up of countries and the emergence of extremist non state players. The current American strategy is incoherent and the transatlantic divisions are patent. The recent admission by Tony Blair of the mistakes, including faulty intelligence (he did not go as far as admitting cooked up intelligence when it comes to WMD for instance), made in the lead-up to the invasion of Iraq and the botched occupation that followed speak volumes about the need to recast Western policies towards the region. The lack of European leadership and creative initiatives is deplorable. European divisions were again underlined by the French resisting any concession to the principle that Assad could not be part of any transition in Syria. Desperate to come back in the game, France has called a meeting of Western powers and their allies to clarify the parameters of a political transition. See also the blog of Alain Juppé: “L’Europe est hors-jeu et la France seule”. Juppé seems to forget that France, along with the other former colonial power, the UK, has done everything it could to fence out ‘Europe’ from the political process since the outbreak of the Syrian crisis.

A regionally-owned solution would have to include a regional security system, including the three non-Arab powers: Israel, Turkey and Iran. Any comparison with the European model should be taken with a grain of salt as the regime put in place after the Cold War is unravelling in front of our eyes because of Ukraine and the new assertiveness of Russia. As we are celebrating the 200th anniversary of the Congress of Vienna, let’s not forget that one of its lessons is that one does not humiliate the vanquished. Such a regime would also need an economic dimension, as one of the root causes of conflict remains the lack of sustainable development. The evolution of the price of oil is a major factor to reckon with.

The irruption of global issues in the current landscape cannot be forgotten. The Middle East is probably the region that suffers from the lowest degree of integration in the global world when it comes to economy, innovation and governance. Droughts and climate change, population growth, migrations and refugees all have had a catalytic effect on the current upheavals and regional disorder. The resilience of societies should get priority attention, including the respective roles of the state and civil societies in transitions and stabilisation policies.

Finally, Europeans and the EU should be aware that there is a circular impact of the crises in Europe and the neighbourhood, especially the South. The crisis of the European model, especially the economy has been an accelerator of the collapse of regimes in the Arab countries. In turn, the Arab transitions, especially the violent ones, have put European solidarity under unprecedented stress, as the refugee crisis and the waves of radicalisation have demonstrated. A strange parallelism is rising between the EU and the Middle East.

Who will solve it?