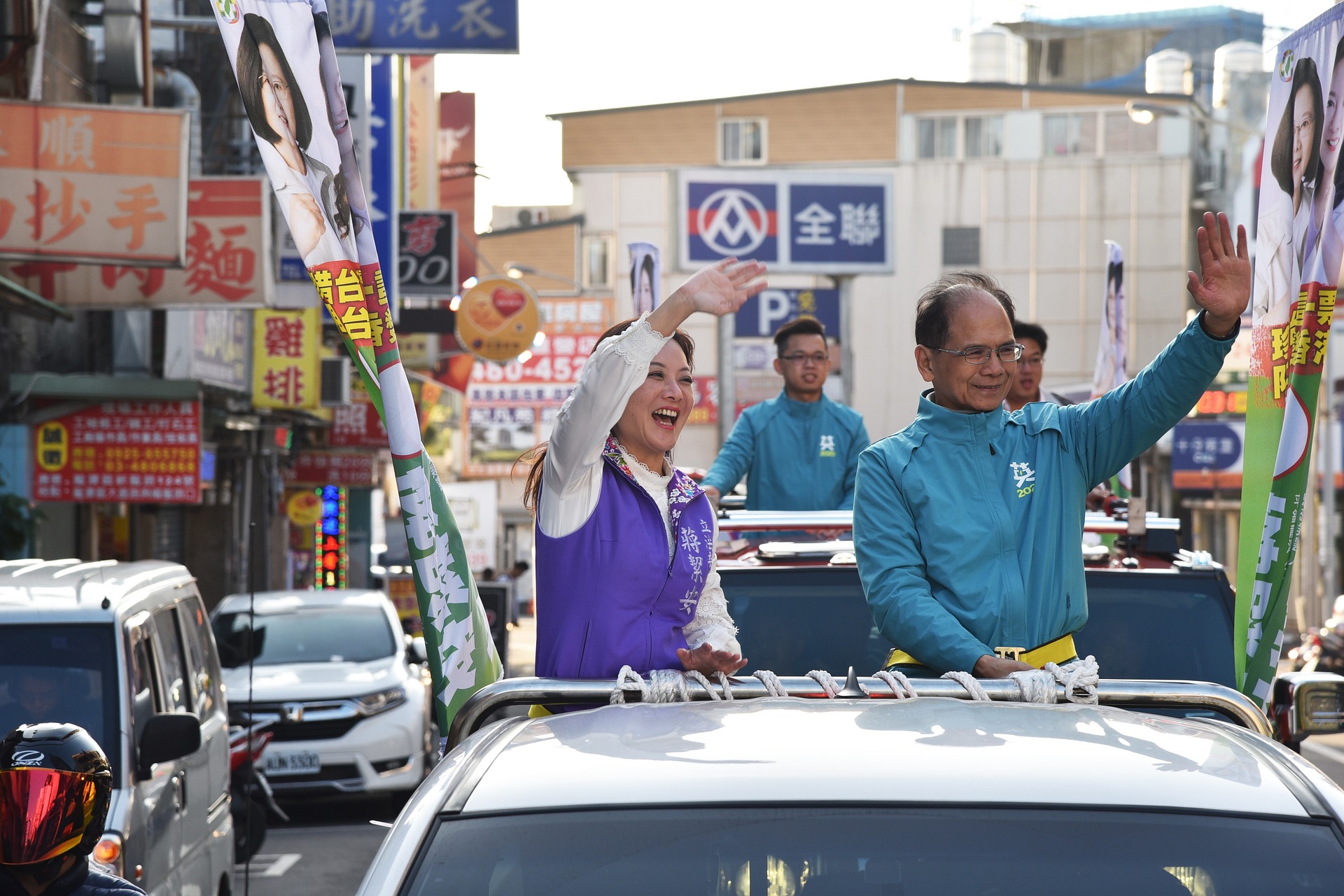 Since the 1990s, the Republic of China (Taiwan) has been one of Asia’s most vibrant and competitive democracies. The People’s Republic of China (PRC), Taiwan’s antagonistic neighbor on the western side of the Taiwan Strait has, however, been an unescapable factor in most of the island’s democratic elections

Since the 1990s, the Republic of China (Taiwan) has been one of Asia’s most vibrant and competitive democracies. The People’s Republic of China (PRC), Taiwan’s antagonistic neighbor on the western side of the Taiwan Strait has, however, been an unescapable factor in most of the island’s democratic elections that have taken place. Through missile test barrages during Taiwan’s first free presidential elections in 1996, the PRC attempted to discourage the island’s electorate from voting for president Lee Teng-hui of the Chinese Nationalist Party (KMT), who was pursuing a platform that increasingly tilted toward Taiwanese independence. The intimidations backfired immensely as Lee was elected by a landslide while the two candidates that enjoyed the PRC’s endorsement faltered.

The China Card: A Powerful Tool during Taiwan’s General Elections

The PRC’s leadership learned from the failure of its aggressive 1996 approach and subsequently interfered less directly in Taiwanese elections. The existential threat embedded in the PRC’s enduring territorial claim on Taiwan has, nevertheless, remained a central issue in plebiscites on the island. The China threat is presently underscored most prominently by the pan-Green coalition led by the Democratic Progressive Party (DPP), which houses a hardline “deep Green” faction that advocates for Taiwanese independence as well as “light Green” moderates – such as incumbent president Tsai Ing-wen – who advocate for maintaining de facto Taiwanese sovereignty as well as promoting a distinct Taiwanese identity without de jure declaring independence. The pan-Blue coalition led by the KMT, meanwhile, is often labelled as the “pro-Chinese” camp in the Taiwanese political spectrum. Presently, however, (short-term) unification with China is only promoted by an increasingly fringe “deep Blue” faction, and the pan-Blue coalition has primarily become a force representing the indefinite maintenance of the status quo under retention of (some) Chinese identity. This “light Blue” faction boasts, among others, former president Ma Ying-jeou (2008-2016).

Normative values and identity have often been major themes in Taiwan’s general elections. As prevailing issues, they have effectively handed a trusty edge to the pan-Green coalition. Since 2000, four out of six presidential elections were won by the DPP, which has considerably benefited from the shift toward a native Taiwanese identity over the last few decades. The pan-Blue camp meanwhile has, be it by shifting margins, generally retained its dominance over local politics through the KMT’s semi-clientelist embeddedness on the grassroots level – an inheritance from its authoritarian past during Taiwan’s martial law era (1949-1987). The KMT benefits considerably from lower turn-out rates during local elections, as their “iron votes” (tie piao) often prove to be steadier as voting bloc than the DPP’s more volatile electoral base.

The most important narrative shift that improved the DPP’s fortunes in the 14 months between the local elections of 2018 and general election of 2020 was, once again, the China threat. During 2019, the Taiwanese people witnessed the effective demise of the One Country, Two Systems (Yi guo liang zhi) framework in Hong Kong – which, ironically, had originally been shaped to entice Taiwan into unifying with the PRC. As the DPP played the China card while capitalizing on widespread anti-PRC sentiments in Taiwan, Tsai’s lagging approval ratings rebounded while the KMT struggled to escape from “pro-China” frames of their 2020 platform.

The 2022 Local Elections: Bread-and-Butter Once More Rules the Day

By late 2022, the pan-Green coalition still enjoys a considerable edge in (inter)national matters. Tsai Ing-wen’s approval ratings have remained robust over her successful handling of the Covid-crisis and her defiant stance in cross-Strait relations has equally been met with widespread acclaim. The DPP’s decision to recycle their 2020 “resist China, protect Taiwan” (Kang Zhong bao Tai) rhetoric during in the 2022 local elections nevertheless turned out to be a mistake. Though the PRC undeniably intimidated Taiwan in the months prior to the November 2022 local elections – especially during and shortly after the contentious visit of US House speaker Nancy Pelosi in August – most Taiwanese people perceived the issues as distinct from the bread-and-butter related to their daily lives. The fact that many of the “Blue wave” KMT mayors elected in 2018 have proven themselves to be capable administrators over the last four years also hurt the pan-Green coalition’s fortunes in 2022.

During the November 2022 local elections, the DPP’s mayoral candidates ultimately failed to entice their supporters to turn-out in large numbers and were, in most cases, unable to get within 10 percent margins of incumbent KMT magistrates. Adding insult to injury, the DPP also lost Taoyuan and Keelung where their popular incumbents were term-limited; the KMT’s decision to field political heavy-weights likely added to the DPP’s electoral woes. The DPP also faced a rout in Hsinchu city – an important semiconductor hub – by Kao Hung-an of the upstart centrist Taiwan People’s Party (TPP) led by retiring Taipei mayor Ke Wen-je. Another DPP fiasco took place in Taipei, where a three-cornered race unfolded over Ke’s succession between KMT candidate Chiang Wan-an, the great-grandson of autocrat Chiang Kai-shek; former DPP health minister Chen Shi-chung; and independent candidate Huang Shan-shan, who was supported by Ke and his TPP. While polls taken shortly before the election already attested to a narrow, but not insurmountable, lead by Chiang, he, just like many of his KMT colleagues, ultimately cruised to victory with a margin of more than 10 percent.

The fact that the outlying Pescadores (Penghu) islands, strategically located on the front-line of the cross-Strait divide between the PRC and Taiwan, turned out to be the sole place where the DPP managed to unseat a KMT incumbent, can probably be considered to be highly emblematic for the DPP’s otherwise questionable choice to prominently play the China card in 2022. Kaohsiung turned out to be another DPP silver lining: The Party consolidated its control over the southern pan-Green stronghold after a shock defeat of KMT populist Han Kuo-yu four years prior – having already successfully unseated Han during a recall referendum in June 2020. Outside of its defeats in the Pescadores and Kaohsiung, the KMT meanwhile only lost Miaoli and Kinmen to independent candidates within their own pan-Blue camp, largely due to local political scandals.

Despite the apparent supremacy of local themes in the 2022 elections, some observations can still be extrapolated to the 2024 general elections. Han Kuo-yu’s 2018 triumph in Kaohsiung proved to be the first stepping stone in ensuring his place on the KMT’s 2020 presidential ticket over more mainstream candidates. Strong KMT performers in 2022 might, in turn, challenge incumbent KMT chairman Chu Li-luan, the Party’s presidential nominee in 2016 and expected candidate for 2024, in the upcoming intraparty presidential primaries.

As 2024 likely comes too early for the still untried Chiang Wan-an, the landslide victory of incumbent New Taipei City mayor Hou You-yi, who increased his 2018 victory margin from 15 to 25 percent, can probably be considered the most remarkable KMT feat in relation to the next presidential election. Hou, who during the last three years of Chen Shui-bian’s DPP administration (2000-2008) served as Director-General of the National Police Agency, can be considered a potential electoral hazard to the pan-Green coalition due to his moderate – “light Blue” – credentials, though the question remains whether KMT members – who are on average “Bluer” than the Taiwanese mean – might not consider him “too light.” Especially if the DPP decides to go “deep Green” in 2024 by, for instance, selecting former premier Lai Ching-te, a KMT contender like Hou could potentially recapture some of the moderate vote lost to Tsai in 2016 and 2020.

Apart from the TPP’s Ke Wen-je, who has already announced that he is “directly preparing” for 2024 and should, unlike his potential KMT and DPP challengers, not be faced with competitive intraparty primaries, it remains to be seen who will appear on the ballot in January 2024. Whoever the DPP ultimately selects to succeed Tsai will probably be faced with a tougher challenge than in 2016 and 2020. However, as the China threat will likely return to the foreground over the next 14 months, and appreciation of maintaining de facto Taiwanese sovereignty is ever-robust amongst the island’s citizens, the DPP still holds the most powerful (China) cards for 2024.