Home > Publications > Mogherini in the European Parliament: a strategic moment 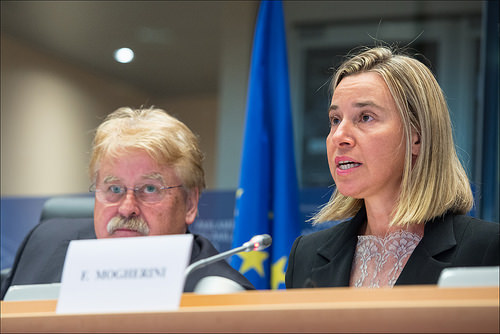 In this article, Sven Biscop looks at some of the key questions that should be asked of Federica Mogherini at her hearing at the European Parliament on 6 October.

On 6 October the European Parliament will hear the High Representative (HR) designate Frederica Mogherini. One of the questions she will certainly be asked is how she plans to take forward the mandate given to her by the December 2013 European Council: ‘in close cooperation with the Commission, to assess the impact of changes in the global environment, and to report to the Council in the course of 2015 on the challenges and opportunities arising for the Union, following consultations with the Member States’.

This the somewhat cryptic compromise resulting from the unresolved debate about whether or not to review the 2003 European Security Strategy (ESS). The European Parliament is mostly in favour. Many Member States remain doubtful as to the added value however, as do most of the officials of the European External Action Service (EEAS) who were involved in the failed 2008 attempt at revision (which produced only a quickly forgotten report about the implementation of the ESS). But nobody can deny that the global environment is effectively changing, rapidly and dramatically. In many areas it is impossible for the EU therefore to carry on with existing policies as if nothing had happened.

Since 2008 the strategic debate has often been hijacked by issues of form: Should a new ESS be drafted? Who will do the drafting? Who will adopt it? The HR would be well advised to leave issues of form aside for now and use the European Council’s mandate to launch a thorough debate on substance, in order to generate a consensus on the broad priorities that she sees for her (first) five-year term. Thus in effect, generating her own mandate that would subsequently empower her to initiate policy. For now, the ‘end product’ to be aimed at (after the HR has submitted her report to the European Council) could thus be a statement of policy intentions by the HR rather than a document that is formally adopted by the European Council. Such a statement could take the form of e.g. a speech in the European Parliament.

The report to the European Council itself, starting from a brief analysis of recent events and developments at the regional as well as global level, could outline which existing EU policies have been the most affected and therefore require substantial reassessment. E.g. the regional order and the European Neighbourhood Policy, including the multilateral forums of the Eastern Partnership and Union for the Mediterranean; the global order and the strategic partnerships including, of course, those with the US, China, and Russia; and Europe’s role as a security provider and the state of defence in Europe. In order to involve the Commission and the Member States in this assessment, as the mandate requires, a seminar could be organised convening representatives from all relevant actors as well as academics. No seminar series is necessarily required: a single two-day seminar, leaving time for profound discussion and including experts who think out-of-the-box in order to ensure creative reflection, can be sufficient.

In function of the European Council’s views on the report, the HR could then in a policy statement set out her views on which policies, as a matter of priority, she will seek to review and revamp. Such a statement ought to be positively framed and express an ambition to achieve objectives, rather than a defensive reaction against threats. As a narrative, it can explain to citizens, parliaments and third countries the distinctive contribution of the EU to international affairs. As a strategic impulse, it can give a sense of purpose to the EEAS and the external services of the Commission, and guide day-to-day policy-making.

Such a statement would need to focus on just three or four big issues. The aim is not to address every item of external action, but to highlight on which issues collective external action through the EU will bring the most added value, because they are of vital importance to all Member States yet too big for any single one of them to address them alone. Here the EU can prove that it is better at defending the Member States’ national interest than the Member States themselves.

Prof. Sven Biscop is a Senior Editor of European Geostrategy. He is also Director of the ‘Europe in the World Programme’ at Egmont – Royal Institute for International Relations in Brussels. He writes here in a personal capacity.