New Development Bank in the making 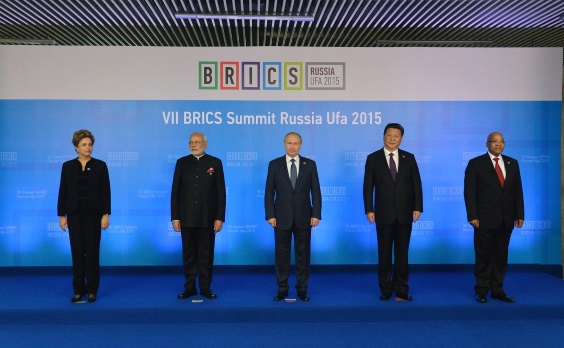 Global governance is undergoing a significant transformation fuelled from the Global South. While the Silk Road Fund and the Asian Infrastructure and Investment Bank have come to dominate the headlines of late, the New Development Bank created by the BRICS has attracted less attention. This commentary takes a fresh look at the state of play of the Bank.

New Development Bank in the making

Contemporary global governance is bleeding from a thousand wounds. Whilst West-dominated post-World War II structures have long incurred the wrath of key emerging powers of the 21st century, the year of 2015 saw their rhetoric finally turn into action. This was the moment when the so-called BRICS countries (Brazil, Russia, India, China and South Africa) launched a set of multilateral structures with the aim of rebalancing global governance and increase their voice on the international stage. Somewhat perversely, however, the Asian Infrastructure and Investment Bank (AIIB), the Silk Road Fund (SFR), the New Development Bank (NDB, formerly known as BRICS Bank) had all materialised in the midst of a general trend of economic downturn across the BRICS. Yet, their worsening economic performances have had little – if any – direct impact on the institutions they had envisaged during their years of economic boom between 2010 and 2013. This commentary takes a fresh look at the state of play of the New Development Bank.

In the wake of the entry-into-force of the Bank’s constituting agreement in July 2015, a team of forty immediately deployed in Shanghai (the host city of the NDB) to commence operational preparations for the institution’s first lending to be performed in the first quarter of 2016. Then, the capitalisation of the Bank began on 14 January this year, when founding members made their first contributions worth a total of $750 million. These transfers form part of the Bank’s paid-in capital that is expected to total $10 billion ($2 billion per founding member) to be paid through seven tranches between 2016 and 2020. The NDB also has a subscribed capital of $40 billion that shareholders must provide when requested by the Bank. The NBD will invest in infrastructure and sustainable development projects in not only BRICS but also other emerging market economies as well as developing countries. The planning and implementation of the projects authorised by the Bank outside BRICS countries will likely be confined to companies of the founding members. It is, however, not clear at this stage whether membership will be a prerequisite for the receipt of funds from the body. Following an initial focus of two years on the BRICS, the NDB is scheduled to accept applications from members of the United Nations as of July 2017, with a possibility of granting observer status to International Financial Institutions on its Board of Governors. There are, nonetheless, strings attached. The collective capital share of the BRICS must reach at least 55% of the institution’s total capital at all times and that of non-borrower countries must not exceed 20%. As voting rights in the Bank are proportionate to the capital share held by its members, in practice this means that developed countries together can only have a share of maximum 20% in the distribution of votes.

As for the lending practices of the bank, little is known at present. Certainly, a significant discrepancy exists between the founders’ attitude to environmental and social standards. On the one hand, Brazil has long been known for robust legislation in these areas, reflected also in the lending policies of the Brazilian Development Bank (BNDES). On the other hand, China and Russia have shown less interest in following stringent environmental and social standards both domestically and internationally. This may make it difficult to design a common environmental policy framework that accounts for different regulations in each country. In addition to differing views on standards, geopolitical tensions between the founding members could also undermine the NDB’s smooth operations. Importantly, while the AIIB was officially up and running less than two years after Chinese President Xi Jinping first floated the idea in October 2013, the NDB has taken over four years to reach operational phase. One such source of tension was the protracted negotiation on where to place the Bank’s headquarters. China’s strong push for Shanghai was largely attributable to hopes of the Chinese political elite to render the city a global financial centre by 2020.

Intra-BRICS divisions may also represent an opportunity for prospective members to bring their influence to bear on the evolution of the Bank. While the issue of membership for non-BRICS countries will not be on the table until July 2017, some countries such as Greece and Iran have already explored the possibility of joining the Bank. As far as other EU member states are concerned, it is hard to see at this point how tempted they will be to benefit from the Bank’s open door policy. Departing from the fact that fourteen of them have become founding members of the AIIB, it is not unlikely that EU members states will be divided in their policies also vis-à-vis the NDB. Development being a policy area where both the EU and its member states have competence to carry out activities, a joint EU seat in the NDB – just like in the AIIB – is unlikely to materialise. Moreover, EU accession would require the incorporation of a Regional – Economic – Integration Organisation (REIO/RIO) clause in the Bank’s mandate, whose feasibility is doubtful given the strong emphasis of its founding members on state sovereignty.

The present absence of EU member states from the Bank does not however mean that they should watch the NDB’s evolution sitting on their hands. Europeans could indeed already swing into action and try and shape the Bank’s modus operandi in line with their interests. The EU’s strategic partnerships with the BRICS offer an avenue to that end.