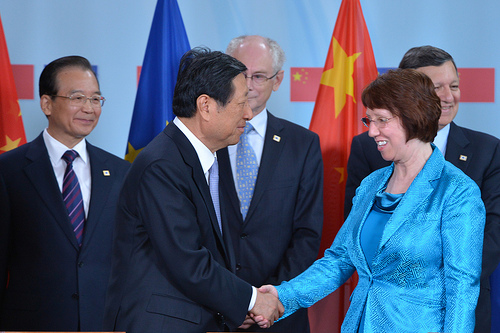 Europe has been Chinese premier Wen Jiabao’s key foreign policy priority during his two terms and ten years in office. After he took over China’s premiership from Zhu Rongji in 2003, Wen’s first China-EU summit was a major success. But the China-EU ‘honeymoon’ was short- lived, and hopes for a China-EU ‘strategic axis’ to oppose US unilateralism after the Iraq war dissipated over the following years. In 2007 and 2008, serious disputes erupted between China and a number of EU countries over human rights and Tibet. The global financial crisis and the European sovereign debt crisis prompted both sides to refocus their bilateral agendas on pragmatic cooperation on economic issues. The last two summits before Wen’s retirement, held in February and September 2012, signalled some advances. This progress allowed the premier to announce that after 10 years of ups and downs, the China-EU relationship is still moving forward.