Home > Publications > Syria, the Middle East and the War in Ukraine 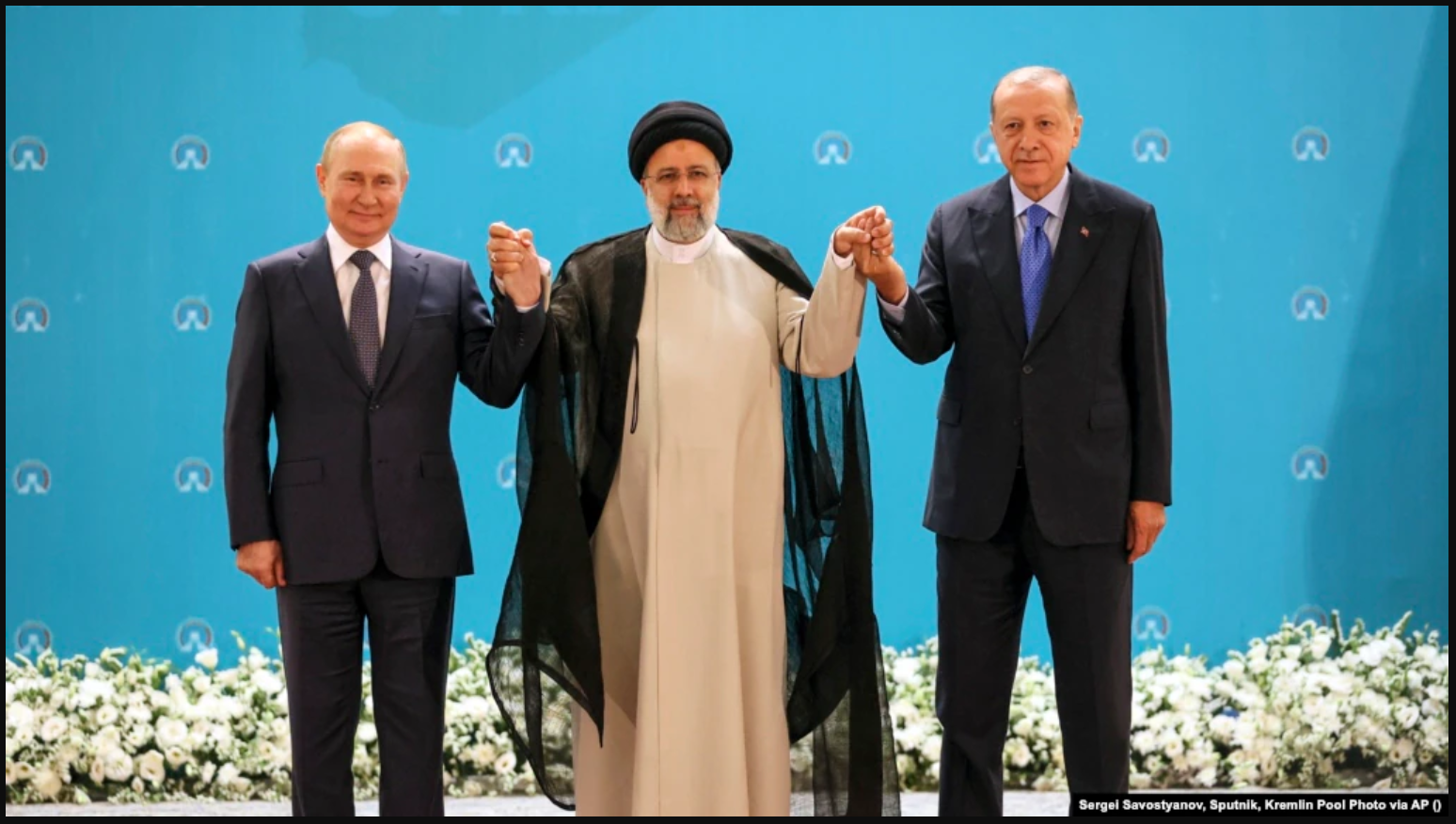 The war in Ukraine has a wide impact in its neighbourhood and beyond. The Middle East is no exception, including the conflict in Syria.

The war in Ukraine has a wide impact in its neighbourhood and beyond. The Middle East is no exception, including the conflict in Syria. While still the theater of armed hostilities between opponents and the regime (supported by its allies Iran and Russia), as well as of potential confrontations between Turkey and the Kurdish militia led by the PYD (an avatar of the PKK), Syria has also been a collateral victim of the Ukrainian battlefield, deprived of essential grain supplies and other commodities  from Ukraine, like many other countries in the region. This has seriously aggravated an already disastrous economic situation. Neither Russia nor Iran have the capacity to compensate for Syrian losses in that respect. Meanwhile, evidence is rising about recruitment of Syrian mercenaries to go fight in Ukraine alongside the Russian army.

Little chance in these conditions to see any progress in the stalled peace negotiations about Syria after 11 years of conflict. The UN Special Envoy for Syria has expressed regrets that talks between the government and the opposition that should have started on July 25 in Geneva “are no longer possible”, apparently because the government of President Bashar Assad claims that Switzerland is not neutral because of its support for European Union sanctions against its ally Russia. UNSE Geir Pedersen said in a statement that a ninth round of talks on revising the country’s constitution could not take place and alluded to the issue of neutrality, stressing the importance for all actors in the 11-year-old conflict “to protect the Syrian political process from their differences elsewhere in the world”. UN deputy spokesman Farhan Haq did not directly confirm the reason, but said that “we reaffirm Switzerland’s neutrality as a place where much of the UN’s work is carried out.. Haq said Pedersen did not want “meetings that are just for show” when it became clear that the July 25-29 meeting could not take place in Geneva.

The postponement of the Geneva talks is not a dramatic or particularly decisive development for the peace process in Syria. The talks have been bogged down for quite some time, due to the lack of commitment by the Damascus regime, which has so far not shown its willingness to respect the spirit of negotiation and the political objectives agreed to by resolution 2254. Its main allies are hardly pushing it in this direction. Attempts at a “steps for steps” approach did not yield better results. Privately, some observers do not hide the belief that the current process has run its course and that the time for radical new approaches has arrived. At the same time, the economic and humanitarian situation in Syria continues to deteriorate. The Russian veto against the proposal to renew for one year the UN cross-border resolution for the delivery of humanitarian aid from Turkey will only worsen current conditions. Aleppo has lost its position as an economic hub in the northwest to the Turkish-controlled enclave. The security situation is barely better, not least because of Turkish threats to strike Kurdish positions in Syria again, not to mention the continuation of Israeli strikes against Iranian positions in the country.

In the meantime the push for normalisation with Damascus is increasing, including by countries which originally helped the opposition, after the regime regained control of much of Syrian territory. The last effort in this respect was the visit to the Syrian capital by Algerian foreign minister Ramtane Lamamra, in the framework of preparations for the Arab League summit that his country will host next November. Syria was expelled from the club in 2012 over the crackdown against peaceful demonstrators. There are increasing calls for Syria’s return to the organisation by Arab countries.

Meanwhile, Russian President Vladimir Putin went to Iran on 16 July for a visit to deepen ties with regional heavyweights as part of Moscow’s challenge to the United States and Europe in the context of its campaign in Ukraine. In his second trip abroad since Russian tanks invaded the country last February, Putin held talks with Iranian President Ebrahim Raïsi and Turkish President Erdogan about the problems facing the region, including the conflict in Syria and a UN-backed proposal to resume Ukrainian grain exports to alleviate the global food crisis.

This is indeed an effort by Russia to close ranks with important partners for Moscow in the regional context. As the West imposes sanctions on Russia and the military campaign in Ukraine drags on, Putin is seeking to strengthen ties with Tehran, another target of harsh US sanctions and a military and trade partner. In recent weeks, Russia has sent experts to visit an airfield in central Iran to examine Iranian drones for  possible use in Ukraine, the White House said. But perhaps more importantly, the trip to Tehran offered Putin a chance to meet with Erdogan, who has sought to help negotiate talks on a peaceful settlement of the Russian-Ukrainian conflict, as well as successfully helped negotiations to unblock the flow of Ukrainian and Russian grain across the Black Sea.  Turkey, a NATO member, has found itself facing Russia in bloody conflicts in Azerbaijan, Libya and Syria.  It even sold drones that Ukrainian forces used against the Russian military.  But Turkey has not imposed sanctions on the Kremlin, making it a much-needed partner for Moscow. Struggling with runaway inflation and a rapidly depreciating currency, Turkey is also looking at the Russian market, while helping Moscow to continue to export its gas. The meeting also had symbolic significance for Russian public opinion, to demonstrate Russia’s international influence even as it becomes increasingly isolated and plunges deeper into confrontation with the West. Putin and Erdogan had another meeting in Sotchi on 5 August where they reaffirmed their cooperation in the fields of energy and economy. At the same time the process confirmed Turkey’s role as mediator in the Ukrainian conflict and in the Middle East.

On 23 August, foreign minister Cavusoglu declared that Turkey has no preconditions for dialogue with Syria but that any talks should focus on security on their border. This constitutes a further softening of Ankara’s stance towards Damascus after a decade of confrontation during which Turkey has backed rebels fighting to topple Syria’s President Bashar al-Assad, and cut diplomatic relations with Damascus early in the 11-year conflict. But the two countries’ intelligence chiefs have maintained contact and recent comments from President Tayyip Erdogan’s government suggest a move towards political engagement, saying there should not be conditions to carry on a dialogue, and calling for negotiations between the regime and the opposition. The goal of Ankara remains to neutralize the Kurdish militia in Syria and ultimately to send back Syrian refugees to their country. Needless to say this has angered Assad’s opponents in the remaining areas of rebel-held Syria and the Syrian opposition in general.  Russian Foreign Minister Sergei Lavrov, speaking after talks in Moscow with his Syrian counterpart Faisal Mekdad, called for talks involving Turkey and Syria to avert a military operation. “The main thing is not to allow any new military action, to negotiate through diplomatic channels on the basis of the political principles that previously existed in relations between Syria and Turkey”, Lavrov said.

Meanwhile President Biden’s visit to the region has not delivered dramatic results, either in terms of energy or a regional alliance against Iran. Many Arab countries including big energy producers have not followed Western condemnations of Russia over the war in Ukraine.  Concerning Iran, US military sources like General Nagata, former head of US special forces in the Middle East, said Iran is today in the strongest strategic position they have achieved since the 1979 revolution. Armed with what is thought to be the region’s deepest stockpile of precision-guided munitions (except probably for Israel), Tehran and the militias it supports have proven their ability to bomb infrastructure in the Gulf from afar. Iranian ballistic missiles could now have a range to hit parts of Europe. He said it’s a zero-sum game. If the US is going to do more in the Middle East, then they will have to do less somewhere else, “and that will be a painful conversation”.

As for the EU, it remains on the sidelines. Its main concerns focus on tackling the energy shortages consecutive to the sanctions against Russia. This situation nevertheless encouraged individual initiatives by member states like France. President Macron has recently welcomed Saudi Prince Ben Salman to Paris to resume a strategic dialogue with Saudi Arabia after years of distancing and amid criticism of human rights organisations. The EU could recover a political role if an agreement on the nuclear file with Iran is finalised and through the implementation of the EU-GCC strategic partnership, among others.