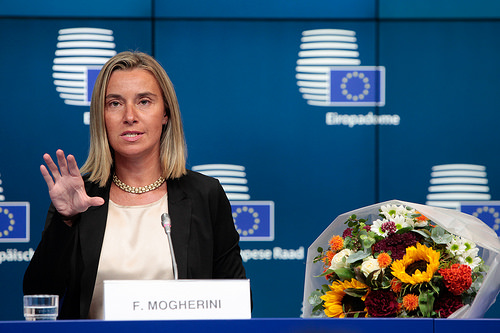 In this article, Sven Biscop assesses the recent appointment of Federica Mogherini as High Representative for EU foreign policy.

Kissinger’s tune is long worn out. What is Europe’s phone number? The question is very much out of date, for the European Union (EU) has had a High Representative (HR) since 1999 already. Since 2009, when the Lisbon Treaty entered into force, the HR even chairs the foreign ministers of the member states when they meet in an EU context. In any case, Kissinger had it easy. He only had one Nixon to cope with. The EU’s HR has to deal with 28 governments, and many prima donnas among them.

No HR can make foreign policy against the member states. But a good HR can drive the capitals in the direction of a resolute European policy. Javier Solana, the first incumbent, did just that, continuously pushing the boundaries of his mandate. His successor, Catherine Ashton, was a lot less entrepreneurial. That is not to say that she did not score any successes – the progress in negotiations with Iran and the establishment of the European External Action Service (EEAS) certainly are important – but the general impression she left is one of a lack of vision and drive.

The HR need not necessarily seek the spotlight. If matters can be advanced by leaving the fame and the glory to others, so be it – outgoing president of the European Council Herman Van Rompuy knows how that works. But the HR does need to be an activist. An astute politician as well of course, in order to reconcile member states’ divergent views. Certainly not a notary, who waits for the member states to make decisions – it is the HR who has to proactively steer decision-making.

That does not mean that the EU should aim to make policy on each and every topic of foreign affairs. It is the HR’s role to focus EU policy on those priorities that, on the one hand, are of crucial importance to all member states and, on the other hand, are too big for any one of them to deal with individually. Surely nobody imagines that Britain, France or Germany alone can deal with the Ukraine crisis, the turmoil in the Arab world, and the growing assertiveness of China. The HR must prove that when it comes to such major challenges the EU is better placed to defend member states’ national interest than the member states themselves. Thus and only thus will the capitals gain confidence in the effectiveness of the common EU institutions (which they have of course themselves created). They better be effective, for the time is past when the United States could automatically be counted upon to come and solve all of Europe’s problems. Obama is busy enough as it is.

Defining these EU priorities and making maximal use of the mandate given by the December 2013 European Council to assess the implications of the changing geopolitical environment, ought to be the very first task of the new HR who was appointed on 30 August.

It would be dishonest to pretend that Federica Mogherini’s name is the one that the pundits wanted to hear. When her name was first put forward, last July, many mostly eastern member states rejected it for being too Russia-friendly. Just now when the future of relations with Russia is an immediate priority that distrust is a handicap, though it has been offset by the selection of the Pole Donald Tusk as President of the European Council. Unlike her predecessor, Mogherini is an elected politician. She knows she has five years now to make her mark: where can results be achieved and a positive contribution made? Herein lie the germs of an updated strategic vision for EU foreign and security policy. Ambition is allowed: the EU is sufficiently prosperous, but is also confronted with sufficient challenges, for it put the bar high.

When back in 2009 the names of Van Rompuy and Ashton were first announced, who to most observers were relatively unknown, many reacted with disappointment to both. With the benefit of hindsight, would one propose to re-appoint them? Ashton perhaps not; but Van Rompuy probably yes. The need is great, there are great expectations – it is up to Mrs. Mogherini to prove she can live up to them. We should all wish her success!