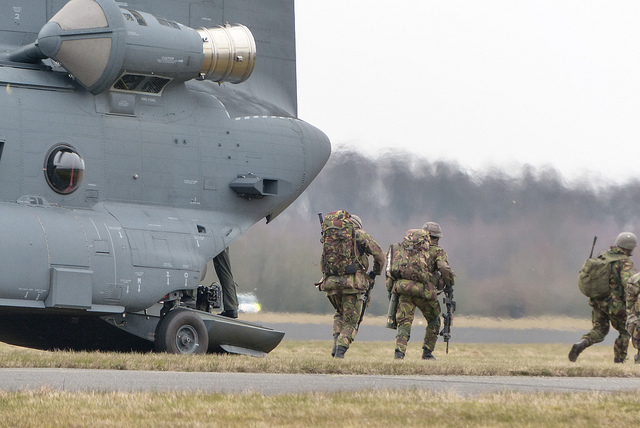 France has ambitious plans for Europe’s defence. But Berlin is still hesitating. Rejecting the French ideas would damage Germany’s image as a reliable partner, weaken Europe’s security and put a further strain on Franco-German relations.

France has highflying plans for Europe’s defence.  In his 2017 Sorbonne speech President Emmanuel Macron outlined his idea to develop a European strategic culture, which is to be achieved through common operations. At the heart of this vision is the European Intervention Initiative (EI2): it should allow Europeans to carry out joint military operations more effectively. The aim is to finally turn Europe in to a capable defence actor.

But Berlins answer to Macron’s defense vision so far was a reluctant and increasingly annoyed grumbling. Eventually, Chancellor Merkel gave a more positive answer in early June saying she was pro “positively disposed towards” President Macron’s proposal and would join an intervention group (continuing however that it should be closely linked to EU structures). There was no enthusiasm in these recent statements, but fortunately no longer a clear-cut “no” either. Yet, the government is not yet entirely on board.

The cautious German response is causing irritation, because this initiative is a priority for France. The starting point for Paris to launch the EI2 is a threefold frustration:

Firstly, Paris considers its Southern neighbourhood as the most important challenge for its national security—as well as for Europe’s—but does not feel that it gets sufficient support to handle defense challenges in the region from its fellow Europeans.

Second, France is no longer able to cope with these challenges on its own: the military is overstretched and despite the recently voted increase of the defence budget, the funding is not in line with the size of the task. Paris needs partners.

Finally, the EU structures have so far proved to be of little help for rapid interventions. Decision-making among 28 EU countries is slow and complicated. And Paris fears that the EU defence initiatives launched since 2016, such as PESCO, will once again be all talk and no action. Above all, they do not cover the operational dimension.

France is thus focusing on solutions outside the EU and NATO frameworks. The experiences in Africa, for example in Mali, served as a blueprint. European defense has to deliver on operations, not on institutional aesthetics, and it needs to do so quickly. France does not want new structures, but rather a flexible and exclusive club that unites those states that are politically willing and militarily able to take action. EU membership is secondary. In this way, Paris can circumvent the slow and cumbersome EU processes and integrate capable non-EU states. Among the nine countries that Paris invited feature therefore EU countries such as Estonia, but also countries like Denmark who opted out of Europe’s Common Security and Defence Policy. Particularly, the EI2 offers the opportunity to continue to involve the UK in European defense, no matter how difficult the Brexit negotiations are.

For the time being, the participating states want to cooperate more closely in areas such as strategic foresight, forward planning, lessons learned and doctrines. While many aspects of EI2 still need to be defined, its ultimate aim remains to carry out operations together.

Although Paris declared its initiative as a contribution to Europe’s capacity to act, the strongest criticism came from Europe. Many states feel overrun by France, and the lack of clarity about some aspects of the project certainly did not help. Some Europeans fear that Paris is only trying to use Europe for its own goals. Germany complains that France’s idea would undermine the EU defence initiatives launched since 2016. It fears the EI2 would weaken the EU’s political cohesion if Paris explicitly positions itself outside the Union and invites only a few states to participate. Eventually, the criticism goes, Paris is disengaging from European solidarity. Although Berlin shares the Parisian analysis that the EU currently cannot start and carry out operations quickly, it wants to find solutions within the Union, and with as many states as possible on board.

Paris rejects these accusations. Rather, it argues that its initiative intensifies and thus improves European cooperation and interoperability – which ultimately benefits the EU and NATO, but above all Europe’s defence. In fact, there is indeed hardly any competition between the EI2 and EU projects in terms of content: EU projects focus on capabilities, they should ensure the long-term basis for operations, i.e. equipment, logistics, etc. The EI2 wants to enable the Europeans to carry out operations at short notice. In the best case, they are mutually reinforcing, as Paris repeatedly emphasizes.

Competition lies elsewhere: both formats, the one in the EU and the one outside, compete for the attention of political leadership, and thus: political capital. In fact, a successful implementation of the French initiative could distract the other EU countries from the EU format. Europeans, especially the smaller ones, now have competing options: cooperating within the EU or outside of it. If all goes well, all formats will be mutually reinforcing. If not, and the capable and the willing act outside EU frameworks, they risk devaluing the Union.

What particularly annoys Berlin, however, is the impression that it seems to have little if no choice at all: in view of the simultaneous rhetoric about the necessity and crucial importance of Franco-German relations for Europe, it is simply inconceivable to reject the initiative.

Despite all the anger: Germany should join the initiative. The political costs of not doing so would be too high. The EI2 is not just any French initiative, it is one that the president personally supported (which makes a difference in a presidential system like France) and is now a highly political project. A German “no” would not only be an affront. Above all, it would hardly change anything: it would not stop the French plans, but merely delay them. It would place an even greater burden on the already strained bilateral relationship. And it would undermine Germany’s credibility as a security actor, and one that takes European solidarity seriously. Germany would not gain much by saying “no”, but it could lose a lot.

As a participant however, Berlin has potentially more influence on the further development than in its role as an external critic. If Germany wants to prevent competition between EU and non-EU formats and instead usefully combine both and assure an efficient use of resources, this can be done better from within.

Ultimately, much more is at stake, namely Germany’s credibility in terms of security policy. At the NATO summit in Brussels in July, Germany is likely to get heavy criticism for its defence spending not coming close enough to the 2 % GDP goal. At the same time, the ongoing reports about the disastrous state of the Bundeswehr make Germany’s allies wonder what the German Armed Forces can actually do. If Berlin now rejects the prestige project of its most important partner in Europe without offering an alternative solution, then Germany’s partners might be tempted to see to a disappointing contradiction between Germany’s rhetorical ambitions and what it really does.

Christian Mölling is the research director of the german council on foreign relations and head of the reseach program „security, defence, armaments“.