Home > Publications > Writings on NATO: One for the Fiction Department

Writings on NATO: One for the Fiction Department 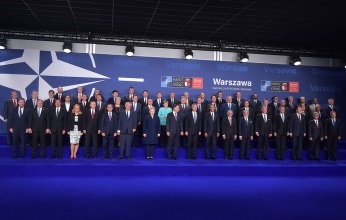 General Sir Richard Shirreff, former Deputy Supreme Allied Commander Europe, has written a very readable thriller: 2017 – War with Russia – An Urgent Warning from Senior Military Command. A rather ominous title, but fortunately there are reasons, after NATO’s Warsaw Summit, to relegate it to the fiction department.

Writings on NATO: One for the Fiction Department

General Sir Richard Shirreff, former Deputy Supreme Allied Commander Europe, has written a very readable Tom Clancy-style thriller: 2017 – War with Russia – An Urgent Warning from Senior Military Command (London: Coronet, 2016). A rather ominous title, especially if one takes into account that although it is a work of fiction, in the preface Sir Richard clearly states that he means it to be read as a prediction.

Thus, according to Sir Richard, in 2017 Russia will invade the Baltic States. Unless, that is, NATO takes measures now to beef up our conventional deterrence and deploy Alliance troops in Estonia, Latvia and Lithuania. Fortunately for us, and rather nicely for Sir Richard, for it is always nice if one’s recommendations are followed, that is exactly what NATO has done at the 8-9 July Warsaw Summit. From early 2017 (just in time!) four multinational battalion-size battlegroups will be deployed in the Baltic states and Poland.

This is a sound decision. NATO must respond to Russian military posturing, in order to reassure public opinion in the countries that border upon Russia that all Allies are fully committed to their defence under Article 5. But it is but Russian posturing. The political and military leaders of the countries concerned should now reassure their people too, not alarm them by clamouring for even more NATO troops and installations on their territory. For in reality, the probability of Russia invading the Baltic states, or any other member of NATO or the EU for that matter, is very low indeed.

Russia is not capable, militarily or economically, of fighting a full-fledged war with NATO. The forces that we have seen deployed in the Crimea and for snap exercises on Russia’s western borders are their best. They demonstrate the lessons learned from the 2008 Georgian war. But they are not, luckily, representative of the whole. Meanwhile, Russia’s shaky economic foundations have been further eroded by the low energy prices and by European and American sanctions. Of course, four battalions cannot defend the Baltic States. But that is beside the point. Because of their geographic location, even four divisions would not be able to defend them – if there were a war limited to the territory of the Baltic states. The point is that four multinational battalions are sufficient to demonstrate that such a thing is impossible: any war with the Baltics automatically becomes a war with NATO.

Additional military deployments would be superfluous therefore, and would indeed play into President Putin’s hand. For he must be all too well aware of Russia’s economic weakness. Which is why he attempts to shift the focus of attention, not in the least of his own domestic audience, to the military arena, calculating that here he can appear the more decisive in the face of necessarily more complex and drawn-out Alliance (and EU) decision-making. It is not in our interest to appear alarmed and confirm Putin’s preferred self-image as the strong leader that rattles the west. A sober reaction, doing what must be done militarily, but not more, and sticking to our diplomacy and sanctions rather than to our guns, is much more effective.

In the end, Russia simply has no interest in starting a war with the United States and Europe. Herein lies the weakness of Sir Richard’s book. He obviously knows NATO inside-out and presents a very plausible account of the political and procedural hurdles to fighting a war effectively and efficiently. (Somewhat less plausibly, every single character in the book, except for the German ambassador to NATO, is gorgeous and athletic and has as many Master degrees as gallantry awards. Not really the image I have of NATO Headquarters in Evere, and I do go out there from time to time. But then one doesn’t read Tom Clancy for the depth of his characters either). However, Sir Richard does not explain why Russia would invade the Baltics in the first place, except because it can – but in reality it cannot.

There is another faulty assumption underlying the book. Sir Richard dedicates it to “my friends in Latvia, Estonia and Lithuania. Men and women who understand the price of freedom”. The implication is, of course, that the men and women of other countries do not. Why that is so, in Sir Richard’s thinking, becomes clear early on in the book when he says that “Britain was now little different from any other semi-pacifist, European social-democracy; more interested in protecting welfare and benefits than maintaining adequate defences” (page 11). In other words, knowing the price of freedom means to be willing to sacrifice such decadent things as social security. But surely freedom must mean the freedom to build a decent life. The reason why those Europeans who lived under Soviet rule don’t want to revert to Russian domination is because the European social model offers them an incomparably better life. The reason why not all Ukrainians are convinced that the Russian model would not be better (at least until Russia invaded their country) is because a corrupt Ukrainian model did not offer them any social security at all.

Therefore, the best way of building resilience (the latest Brussels buzzword – resilience is the new hybrid) against any foreign narrative is by strengthening our social model, not by abandoning it in order to rearm. Social security and defence are not in competition. Both are core tasks of the state, and if the means of the state are insufficient to provide both, then the means must be augmented, not a core task neglected.

In that sense Sir Richard is right: we have neglected defence for too long – just as the EU especially has neglected social security for too long. As a result, our conventional forces have been hollowed out, as has citizens’ commitment to the EU and to governments that overenthusiastically followed its prescription of austerity. The answer is to reinvest: in both. Only then can Sir Richard’s book safely be put in the fiction department.

Prof. Dr. Sven Biscop is Director of the Europe in the World Programme at the Egmont – Royal Institute for International Relations, and teaches at Ghent University and at the College of Europe in Bruges. He is an Honorary Fellow of the European Security and Defence College.