Home > Publications > Biden, NATO and the EU: Who Deals With China, and Who With Russia?

Biden, NATO and the EU: Who Deals With China, and Who With Russia? 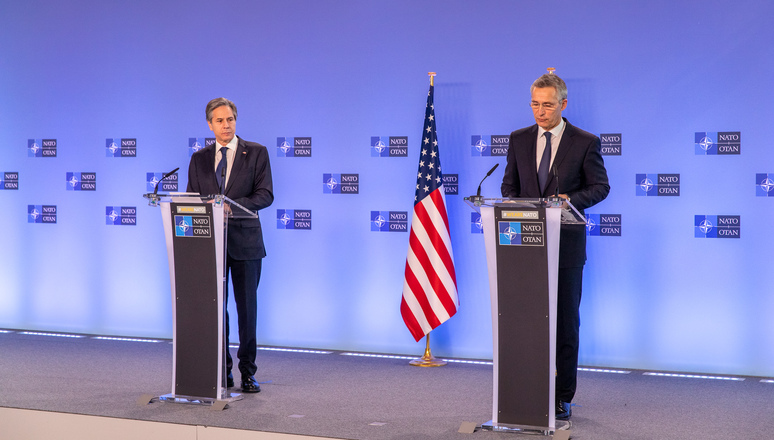 NATO is a unique alliance – not only because of its longevity (it turns 72 this year) and its bloodless victory in the Cold War (since its opponent crumbled from the inside). It is unique also in that it is an institutionalized alliance: In addition to a standing military command structure, it also has a permanent politico-military headquarters in Brussels with some 1,000 civilian and 500 military personnel, headed by a Secretary-General.

This commentary was also published by Aspenia.
(Photo credit: NATO)

Biden, NATO and the EU:
Who Deals With China, and Who With Russia?

NATO is a unique alliance – not only because of its longevity (it turns 72 this year) and its bloodless victory in the Cold War (since its opponent crumbled from the inside). It is unique also in that it is an institutionalized alliance: In addition to a standing military command structure, it also has a permanent politico-military headquarters in Brussels with some 1,000 civilian and 500 military personnel, headed by a Secretary-General.

This is such a prominent feature of NATO that often this bureaucratic apparatus is mistaken for the actual alliance, that is the treaty bond between the member states. Compare the US alliance with Australia or Japan, for example. These do not have their own bureaucracy, so when Washington discusses issues with Canberra or Tokyo, any decisions are afterwards implemented by the national governments concerned. In NATO, however, whenever an issue is discussed between allies, there is always the temptation to add another branch to the NATO headquarters, and have the apparatus begin to produce papers.

Added to this is the cyclical tendency to broaden the NATO agenda. Every so many years, the fear crops up that the alliance is losing relevance. Why this is so, is not clear, for its relevance is obvious: NATO guarantees deterrence and defense for all 30 allies. But the answer to this somewhat irrational fear is always the same, as it is today when the alliance reflects upon its future in the NATO 2030 process: Let’s add more topics to NATO’s remit. Thus, NATO meetings cover energy, climate, migration, technology, resilience, and, most recently and urged on by the US, China.

Of course, NATO allies must discuss and consult each other on all issues that they deem relevant for their defense, including those listed above. But that does not always mean that the NATO apparatus is best placed to implement any conclusions at which the allies arrive. In most cases, indeed, it is not, for lack of authority, expertise, and instruments outside its core area of deterrence and defense. NATO can assess the impact of the climate crisis on security threats, for example, and green its own way of functioning – but what more is it going to do to halt the climate crisis? On most of these topics, it is the allies themselves, but also the European Union, that have the responsibility and the capacity to act on the core of the matter.

Very often the push to widen the agenda comes from the US. Very often as well, the European allies are less enthusiastic, but end up giving in, doing just the minimum to keep the US happy. Whether that makes the alliance more effective, is doubtful; it rather dilutes its focus and cohesion. At NATO’s foreign ministers’ meeting in Brussels on March 23-24, however, the European allies seemed to be more aware of their own specific interests and less inclined to follow the US lead.

Just like the Trump administration, the Biden administration has been pushing to put China on the NATO agenda. In Brussels, US Secretary of State Anthony Blinken declared that China is a threat to the allies’ collective security and prosperity. The statement that the ministers adopted duly speaks of “assertive and authoritarian powers” that “challenge the rules-based international order, including through hybrid and cyber threats, the malicious use of new technologies, as well as other asymmetric threats” – but it mentions only Russia by name, not China.

The Biden administration is, in fact, a lot more nuanced in its appraisal of China than its predecessor. Its Interim National Security Strategic Guidance states that “strategic competition does not, and should not, preclude working with China when it is in our national interest to do so.” That is very close to the EU’s view that China is a partner, a competitor, and a rival all at once. American and European interests do not entirely overlap, however. For the US, as the leading great power, the rise of China as such is much more inherently problematic than for the EU. The recent deterioration of relations following the adoption of mutual sanctions notwithstanding, few in Europe see China as a direct security threat.

For most Europeans, therefore, China is primarily a foreign policy issue, which they prefer to deal with through the EU. Rather than distract NATO from its core task of deterring and defending against Russia, the NATO apparatus should limit itself to monitoring developments in Chinese defense that have a potential impact on NATO’s defense. It is worth noting that the central and eastern European allies that are most concerned by Russia’s assertive behavior are also the most open to China, whereas many western and northern European countries that also favor a stronger EU role in defense have become more careful of China’s presence on their markets.

China is indeed also a major geo-economic issue. The main way in which the EU and China position themselves vis-à-vis each other is by building connectivity with other states and by instrumentalizing access to their own markets. The EU’s economic power largely determines its resilience: its capacity to take its own decisions and provide citizens with the public goods that they require in the face of all attempts at subversion and coercion by any foreign powers.

Resilience, like China, is another issue on which there is a large gap between the amount of time that NATO dedicates to it and the actual contribution that its apparatus can bring. The key actor on the European side, actually, is again the EU: The EU is a single market, so any act of coercion or subversion by a foreign power against one member state affects the Union as a whole. To prevent coercion and subversion, most geo-economic competences lie with the EU or are shared with its member states. It certainly is not up to NATO, or to the US, to decide, for example, which Chinese (or Russian) investment can or cannot be allowed in the EU.

On the one hand, when responding to subversion or coercion, diplomatic and economic sanctions are also adopted through the EU – few member states will dare confront another power alone. On the other hand, not every act of subversion or coercion against the EU has an effect on or calls for measures from the US and other non-EU allies. The NATO apparatus, in any case, has little or no instruments in these areas. The allies can coordinate, and the apparatus can design benchmarks, but only to the extent that these are reconcilable with EU policy.

In other words, if the US wants to get something done on China, resilience, and other issues that are not primarily defense-related, the solution is not to channel them through NATO, but to speak directly with the EU. Which is precisely what Secretary Blinken did after the NATO ministerial, meeting with EU High Representative Josep Borrell. They agreed to finally launch the EU-US dialogue on China that was already discussed, but in the end proved impossible with the Trump administration. NATO, meanwhile, should stop trying to build its profile in areas where others are much better placed. Instead, it should focus on its core tasks, which it does very well: deterrence and defense.

Prof. Dr. Sven Biscop directs the Europe in the World programme at the Egmont – Royal Institute for International Relations in Brussels, and lectures at Ghent University. His new book, Grand Strategy in 10 Words – A Guide to Great Power Politics in the 21st Century, will come out in June.