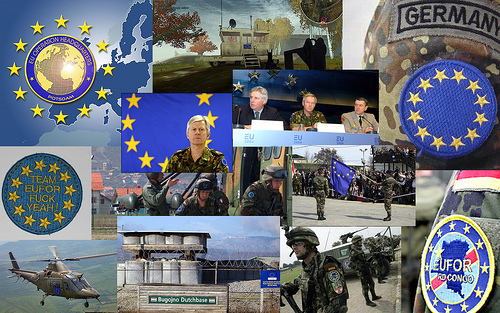 These last few years the EU has taken considerable steps to give more substance to its Common Security and Defence Policy (CSDP). Nearly all the pieces of the puzzle are on the table now. There is consensus on the urgency to improve Europe’s security. But how to assemble the various pieces of the puzzle in a structured manner? In this regard, the start of a new Commission is an opportunity not to be missed.

This article was first published in E-Sharp. Read the full text below.

These last few years the EU has taken considerable steps to give more substance to its Common Security and Defence Policy (CSDP). Nearly all the pieces of the puzzle are on the table now. There is consensus on the urgency to improve Europe’s security. But how to assemble the various pieces of the puzzle in a structured manner? In this regard, the start of a new Commission is an opportunity not to be missed.

The central piece of the puzzle is the Global Strategy (EUGS), which defines the EU’s political level of ambition. The Union has the duty to protect its citizens, which requires it to be a global actor in security and defence. That in turn requires strategic autonomy, at least to conduct military crisis management operations.

The military level of ambition: look to the future, not the past

Three years after the publication of the EUGS, the definition of the military level of ambition has still not progressed beyond where the EU already was in 1999: the Helsinki Headline Goal (HLG), a catalogue, the scope of which is the military capabilities which back then would have been required for operations in former Yugoslavia.

The lessons that have meanwhile been drawn from recent, often long-term operations reveal that the military level of ambition corresponding to the political one of the EUGS boils down to, operational reserves included, not one but three army corps. Doable, if member states make maximum use of new EU instruments such as Permanent Structured Cooperation (PESCO) and the European Defence Fund (EDF).

In terms of military capability planning, NATO procedures, and especially the order in which the US undertakes defence planning, ought to inspire the EU, also in order to ensure coherence. First, EU Member States need to determine what is required to achieve autonomy in crisis management. The EU must be able to act whenever the European interest is primarily at stake, for systematically appealing to NATO and the US no longer is Washington’s preferred option – to put it mildly. Subsequently, those EU Member States that are also NATO Allies must assess which additional capabilities they need to meet their commitments in NATO. As does the US.

The military operations that the EU has conducted so far, have seldom led to durable peace. Often the force deployed was undersized relative to the task. On the civilian side, humanitarian aid and development aid were often and economic support nearly always insufficient, although they are a prerequisite for a durable solution. Political attention often evaporated quite soon after the first military deployment. All of this points to the same conclusion: existing EU structures must be adapted. A fully-fledged strategic-military headquarters and an overarching civilian-military crisis management headquarters – to insure a true comprehensive approach – are both indispensable.

Two decades after Saint-Malo there is still no format in the Council or the Commission that can align and set overall priorities on CSDP matters. For the moment, CARD therefore only serves to lay bare the problems. The High Representative and the Foreign Affairs Council must of course maintain their authority, obviously also in matters of security and defence. Yet at the same time vital issues of war and peace are Chefsache: such decisions are made at the highest political level, and require a specific preparation. That demands a specific structure, both in the Council and the Commission.

No new structures are required, but the existing ones must be reconfigured

First, the time is ripe to appoint a Commissioner for Security and Defence, with competences in the areas of space, cyber and defence, and in particular for the industrial dimension of the production of all required civilian and military capabilities. He/she would contribute to the decision-making on the definition of capability priorities.

Second, a European Security Council could be created at the level of Heads of State and Government, to take decisions on the launching of civilian and military operations, but also to ensure more permanent political guidance once they are deployed. Such a Council would also guide a more effective policy of prevention. The European Security Council would have the same composition as the European Council. The difference would be the dedicated focus on security and defence, but also the nature of the decision-making: leaving space to those that are able and willing to act (in accordance with Article 44 TEU that creates the possibility of entrusting implementation of a task to a group of Member States). “Events” will determine how often the European Security Council should meet.

Every global actor except the EU has analogous structures to allow for agile decision-making. Introducing the same in the EU ought therefore to be but a small organisational step for the Union, but it would be a giant leap for the protection of the Union’s citizens.