Home > Publications > Whom are we fighting? Some thoughts related to Russia’s latest mobilization plan

Whom are we fighting? Some thoughts related to Russia’s latest mobilization plan 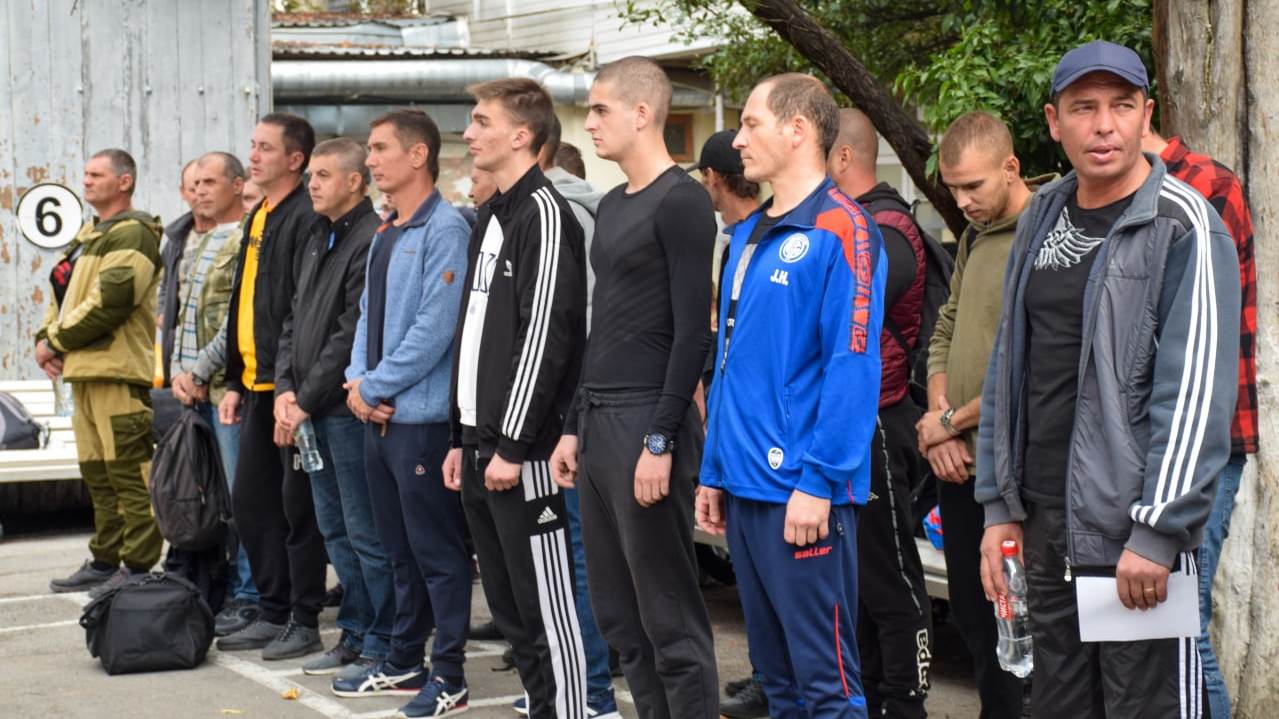 Under the pressure of Ukraine’s counter-offensive and a significant setback in the Kharkiv Oblast, Putin has chosen the path of escalation, if not of total war.

Whom are we fighting?
Some thoughts related to Russia’s latest mobilization plan

Under the pressure of Ukraine’s counter-offensive and a significant setback in the Kharkiv Oblast, Putin has chosen the path of escalation, if not of total war. On 21 September 2022, during a pre-recorded address on state television – the first after the announcement of the so-called “special military operation” on 24 February – the Russian president announced the immediate partial mobilization of Russia’s reserve force. As if to emphasize the seriousness of his plan, he repeated Russia’s nuclear threat toward the West. “Eto ne blef” (It’s not a bluff), he said with dramatic intonation and a deep gaze into the camera.

If anyone has ever doubted it, Putin’s aim is apparent; he will not shy away from the self-induced stalemate with Ukraine as he will accept all possible consequences of his choice, even his own downfall. For those familiar with the personality of the Russian president, recently once more exposed in Philip Short’s authoritative biography, this may hardly be a surprise.[1] Yet, as the Flemish writer Willem Elsschot wrote in 1910, “Between dream and reality, laws and practical objections stand in the way”.[2] Putin’s measures are indeed problematic. They show us the tragic essence of Russia as a state: how it is governed and functions. To bolster this statement and consider its consequences, let us zoom in a little further in on Putin’s mobilization plans and the reiteration of its nuclear threat.

Since the fall of the Soviet Union, Western analysts of all kinds have been discussing the status of the Russian Federation in the world system. Is the UN’s Security Council member still a world power or just a regional power? To a certain extent, these qualifications are somewhat fluid, if not subjective, as they sometimes may have been influenced by triumphalistic sentiments. Yet, we all remember how Putin was seriously offended when President Obama, in March 2014, categorized Russia as a regional power not acting in the same league as the United States. Emotions aside, the reality is that Russia is both weak and strong. And it is precisely this paradox that poses a severe problem in the nuclear debate.

Russia lacks the sound foundations to be a stable and sustainable great power. Russia’s economic basis is one-sided at most; demographic developments are problematic; the difference between rich and poor and between the city and the provinces are enormous. Moreover, Russian society is atomistic, opportunistic, and cynical, and its leaders are manipulative, brutal, and increasingly repressive, which results in a volatile political system. Finally, and if one thing is clear from the military operations in Ukraine, Russia’s military is inefficient and non-compatible with the status of a great power. Nevertheless, Russia possesses the world’s biggest stockpile of nuclear weapons and a highly proactive nuclear strategy. Thus, Russia remains a world power even in its most vulnerable and weakest state. The danger of such an unbalanced power status is that the escalation ladder is steep and quick, especially since the Russian leadership is currently poisoned with imperial nostalgia, status anxiety, and frustration. Immense frustration. Therefore, the Russian situation may indeed be qualified as a case of tacit implosion.

In this context, Russia’s nuclear power must be taken (very) seriously. Therefore, we need a risk analysis that includes the unthinkable scenario where Russia applies the nuclear option. This nuclear option may take place in Ukraine or against members of NATO. It may be exposed by misusing civilian nuclear plants or using tactical/strategic nuclear weapons. The question to be answered is: what will be our reaction in case of such an event, and, most importantly, how will we protect our citizens? This is not to impose fear, let alone to cause panic among the population. Yet it is time we become risk-aware and prepare for the worst. A mature risk analysis combined with a decent crisis management plan, including an information and awareness campaign, has become a duty, not an option, in case of a nuclear incident.

In this context, experts and politicians should refrain from expressing laconic opinions concerning Russia’s nuclear threat. According to threat analysis and warning specialist Cynthia Grabo, threat assessment does not emerge from a compilation of “facts” nor does it flow from a majority consensus.[3] A threat assessment results from a focused and exhaustive research effort and is expressed in probabilities instead of certainties. A (nuclear) threat assessment is thus a very specialized area of expertise that needs years of training. Most of us, myself included, do not have this expertise as we lack the experience and knowledge, let alone access to the necessary highly classified information. Therefore, we should be extraordinarily prudent in expressing our opinions about Russia’s threatening rhetoric and the intentions of the Kremlin. The nuclear threat, indeed, does not warrant terse, reassuring statements. Instead, let us prepare for the worst and hope for the best.

Immediately after Putin’s speech was broadcasted and the mobilization decree was published, Russia’s minister of defense Shoigu gave more details about the mobilization intentions, announcing that 300.000 reservists would be called up and 2,5 million men would be subject to the “partial mobilization”. (This is 1% of Russia’s reserve base that – theoretically – counts 25 million men). Those familiar with Russian recruitment and mobilization practices, as we have monitored them since the mid-1990s, are aware that this announcement is highly problematic. Russia’s reserve force only exists on paper as few are actively trained or prepared for war. In 2019, educated guesses were that Russia had only 5000 active reservists or soldiers who receive regular training. The attempt to create a combat-ready reserve by recruiting 100.000 volunteer reservists who would be decently paid and trained, known as the BARS-2021 program, only started in August 2021. But also, this program has evaporated partly due to the war in Ukraine. The Kremlin’s behavior is the leading cause of its failure. What is left is repression. Indeed, the success of Russia’s current mobilization effort will be directly proportional to the level of the state’s repression.

The scenes we currently observe, including mobilization evasion, sabotage, street protests, and the terrible circumstances of housing, administrating, and weaponizing these reserve forces, may not surprise us. They are not new, as draft evasion, poor living conditions, inadequate training, neglect by officers, and brutal treatment of soldiers have been witnessed since the Soviet period. One must only consult Svetlana Alexievich Zinky Boys to get a glimpse of this reality.[4] The current self-inflicted crisis only exacerbates these practices. In other words, with the announcement of the mobilization of reserve forces, the Kremlin has taken a considerable risk reinforcing the tacit implosion we have mentioned above.

As we study the Russian armed forces as a mirror of society, the mobilization effort exposes a fundamental trait of the Russian state. At this moment, we have to remark that the current mobilization call is just another step in a campaign that started in 2016, if not earlier. Indeed, the Kremlin has significantly increased its efforts to send an anti-Western (anti-NATO) message to society accusing the West (and NATO) of preparing for war against Russia and of Russophobia. The Kremlin’s message is unmistakable: the Motherland is threatened and must fight for its survival. At the same time, Russian heroic (military) history – at least the state-controlled version – has been highlighted in the media, the school curriculum, and youth movements. With the total control of the minds through media and other propaganda channels, the prioritizing of military build-up, the cultivation of an anti-Western enemy image, and the mobilization of society, it might be straightforward that the Russian state has been preparing for total war. Whoever listened to Putin’s annexation speech on 29 September, which was a compilation of conspiracy theories, fabrications, and ridiculous distortions, has witnessed the culmination point of this mindset.

Russia’s behavior is irrational. It is fighting an offensive war based on self-inflicted and imaginary threat perception, and it persists in its illusions even when evidence makes clear that it is a dead end. Within this devilish construct, the only “rational” element the Kremlin is counting on is time. Russia tries to buy time in the hope that the European countries will collapse before Russia’s downfall. Concretely, the Kremlin is counting on a cold winter, causing severe economic stress and social unrest. The tragedy is that there is some truth in this cynical calculation: the European countries are under extreme economic pressure. Therefore, opposing Russia is, besides a tough military challenge, also a political test. And our first line of defense against Russia is the quality of our democracies and our ability to mobilize the minds against the specter of authoritarianism. As a witticism, let us put on another sweater and take up the challenge.

Thinking about the current Kremlin’s behavior, Ian Kershaw‘s book The End regularly pops up in our minds.[5] It describes and explains how the Hitler regime, despite its evil illusions and desperate situation, persisted in its errors, anger, and evilness until the very end. The result was a destroyed Germany and a world in disarray. History doesn’t repeat itself; it just rhymes, Mark Twain mused. Yet, let us not underestimate the challenge, perhaps the most serious since World War II. Instead, let us stoically prepare for what will come. “A sweater against Putin”, we would argue.

(Photo credit: Council of Ministers of Republic of Crimea, CC BY 4.0, Wikimedia Commons)